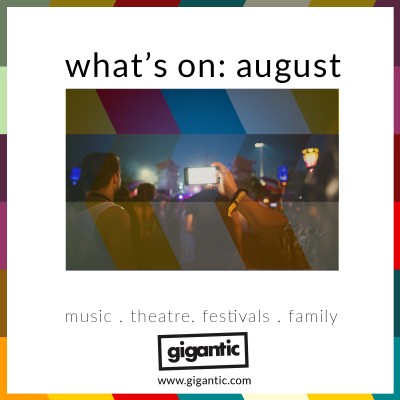 August is the blissful month that brings with it the hot weather and the good times. It is the perfect time to enjoy the many festivals that are a vital part of your British summertime or try one of the thrilling outdoor shows and events that connect the performer and the audience for a unique experience like no other.

Gigantic always has the best tickets to a huge number of the very best events. Keep scrolling to check out our guide to your Essential: August.

Simple Minds exploded in the 1980’s by being able to bridge the gap between critical acclaim and commercial popularity which has seen them win the prestigious Ivor Novello Award for Outstanding Song Collection from the British Academy of Songwriters, Composers, and Authors.

This summer sees them joined by Chrissie Hynde’s band The Pretenders plus extraordinary songwriter KT Tunstall to commence a superb tour of the Scottish acts.

Every year, Shrewsbury Folk Festival attracts folk fans from across the globe, drawn to the impeccable selection of traditional and contemporary world class performers. Plus, join in the fun at the craft fair, be part of a ceilidh or relax at the bar.

Shrewsbury Folk Festival returns to West Midlands Showground from Friday 24th till Monday 27th of August. Get your ticket today!

Remember the days when new romantic gazed at themselves in the mirror, DJs first began scratching records and yuppies flaunted mobile phones the size of bricks? Jack Up The 80s invites you to return to the decadent decade with performances from Chesney Hawkes, T’Pau and Martin Kemp.

Jack Up The 80s encourages all their attendees to dress up as their favourite actor, popstar or 1980’s icon to really get into the mood.

Last year, saw the release of Eyre Llew’s debut album ‘Atelo’ which thrilled critics and fans alike with their deft and nuanced song writing which draws the listener with building emotion weight before exploding into a crescendo of euphoria.

Eyre Llew return to the stage in their hometown to perform an unmissable gig at The Space in Nottingham Contemporary before touring across mainland Europe and Asia.

Having just released their latest album ‘Year Of The Snitch’, Death Grips head on over to promote the new material with gigs at O2 Academy Brixton and Albert Hall in Manchester.