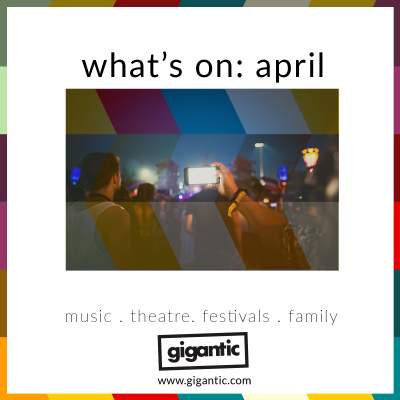 Spring has definitely sprung now that April is here and Gigantic brings you a fantastic selection of great gigs with something to satisfy everyone’s musical tastes. Book your tickets right now because you would be a fool to miss out!

So, stick with Gigantic to choose from our ever-growing list of the best events, theatre shows, festivals and more.

The Good The Bad And The Queen

When Damon Albarn isn’t bust being an indie icon with blur or a semi-fictional cartoon popstar with his other outfit Gorillaz, he’s teaming up with , Paul Simonon, Simon Tong, Tony Allen and producer Danger Mouse for The Good The Bad And The Queen. The have announced an extensive tour for April with tickets on sale with Gigantic.

The Good The Bad And The Queen tickets are currently available.

Revolution Pro Wrestling never fails to bring the high-octane action! The British wrestling promoters was first founded in 2012 and has quickly attracted a huge number of dedicated fans to every bout. In April, Revolution Pro Wrestling comes to Portsmouth, Southampton and Bristol before heading on to London for two nights in May.

Looking for some classic pop rock? Daryl Hall & John Oates will be playing Resorts World Arena at Birmingham on Wednesday 24th and Manchester Arena on Sunday 28th of April, followed by The SSE Hydro at Glasgow on Wednesday 1st of May. Joined by KT Tunstall playing support, what a great night out!

Last year, Watford’s finest alt-rockers The Hunna released their stunning second album ‘Dare’ which shot right up to No. 12 in the charts. They have dates all round the UK in April before featuring at Neighbourhood Weekender at Victoria Park in Warrington at the end of May.

The Hunna tickets are currently available.

Led by Stina Tweeddale, Honeyblood is the growling lofi indie rock you need in your life. Poised to release their eagerly awaited third LP ‘In Plain Sight’ in May, Tweeddale has grown the outfit from a two-piece to a full band and they hit the road at the end of the month.

Ambient post rock outfit Eyre Llew have been finding huge international success, having toured heavily in South Korea and attracting listeners right across Europe. With the release of their new EP ‘Carrier’, the Nottingham based trio kick off the UK leg of their tour before heading back out to East Asia.

With the release of his third album ‘Health’, Scottish indie folk songwriter C Duncan kicks off his promotional tour this month. Produced by Elbow’s keyboardist Craig Potter, this is the first time C Duncan hasn’t worked totally alone; “This was the biggest shift in dynamic for me... having always worked alone, it was a daunting prospect but one I knew I had to explore.”