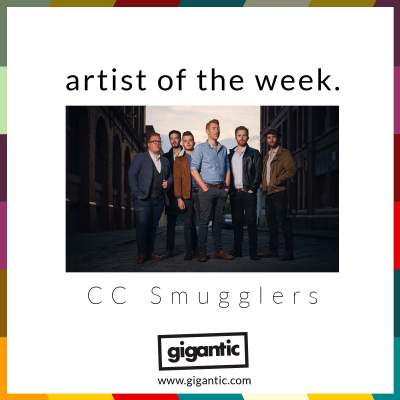 Innovative and wildly fun, CC Smugglers are the rowdy band of British street performers taking the county by storm. Drawing on jazz, swing and blues plus world folk, their amalgamation of Americana with wider influences and giving them a contemporary twist is winning them fans everywhere and seeing the lads played to ever-larger packed out venues.

Their band members include founder and multi-instrumentalist Richie Prynne who takes on lead vocals, rhythm guitar and banjo; drummer Iain McFarlane; Tom Seals playing the piano and accordion; guitarist and fiddler Sam Barret; with Dan Edwards on the double bass.

“If you think of Mumford & Sons as The Beatles then CC Smugglers are The Rolling Stones.” - Folking.com

CC Smugglers was first started by Richie Prynne after reaching out to school friends Sam Barret and Dan Edwards to form a busking collective to perform on the streets all around the country. This style of ‘guerrilla busking’ would become a central pillar to the later sound and style of the band and after recruiting pianist Tom Seals and percussionist Iain McFarlane to complete the band, the began their energetic live performances which included leaping into the audience to play amongst the crowds. This dynamic action and original approach to traditional genres would capture the media’s attention and word quickly spread about the new gang with a real flair for stage (on and off!) presence.

This year has seen the release of their thrilling debut album ‘How High’. Thirteen tracks of infectious rhythms, stomping enthusiasm and their charisma really shines throughout. Check out sweet single ‘How High’, ‘Smiling’ which includes contributions from the Oxford Gospel Events Choir and their raucous number ‘Working Man’. This first full-length record has emboldened the boys to seek shows further afield in foreign lands;

“We would like to tour some new countries, like the US or Australia. We just toured with All Our Exs Live In Texas and we would love to tour around with them in their home country. We want to expand our audience base and just reach everyone.“

The lively lads take ‘How High’ on the road this month and you can see the lively lads playing up and down the UK. Grab your ticket to see CC Smugglers right now!