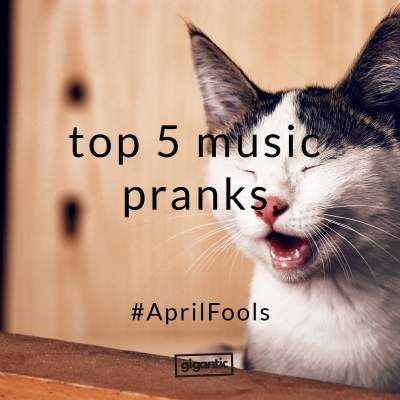 Hands up. Whose been fooled already? Gigantic is here with our Top 5 hilarious pranks by our favourite musicians. Keep scrolling to get some vids full of funny stuff.

Multi Grammy Award winner Adele is so famous, she doesn’t even need a second name! But what happens when she teams up with Graeme Norton to fool a gang of her super fans and impersonators? Will they get away with it?

Who doesn’t love a go on the karaoke? It’s a great way to let rip and show off your singing skills with all your friends. Imagine if you were rocking away to your favourite tune and the star was watching you all the time? Bon Jovi dons a pretty ropey looking wig and beard and surprises his fans.

Comedian and chat show host Jimmy Fallon is known for his pranks involving celebrities, and they don’t get any bigger than our own Macca. The New York funnyman and Beatle surprise members of the public as they ride a skyscraper lift.

Considering he’s got a fair few facial tattoos and he’s one of the biggest names in hip hop right now, you would think everyone would recognise Post Malone no matter where he is. But put him in a uniform and give him a pair of glasses and suddenly no-one seems to spot him.

Don’t think we get to enter the Bentley competition though which is a shame. But have you seen THIS though?!

Opinions. Everyone has one and can’t wait to share it with everyone. But what do you do when you have just torn 50 Cent apart in front of a TV crew and you realise he’s stood literally right behind you?!