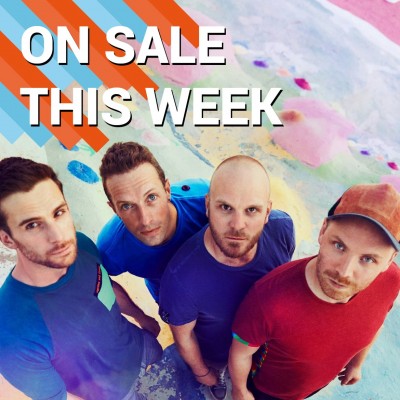 From their indie days in the mid-nineties to the megastardom they enjoy today, the rise of Coldplay has been meteoric. They burst onto the scene and captured our hearts with melancholic anthem Yellow which rocketed their debut album Parachutes to #1 in the UK charts. Since that early release they have continued to dominate the charts with each subsequent album release hitting the hotspot.

Their latest album entitled A Head Full Of Dreams has continued their trend of reaching the coveted #1 and has already been certified double Platinum. Having already toured the new material across Latin America and Europe, they will headline Principality Stadium in Cardiff next July.

Blast yourself back to the decadent eighties when shoulder pads, shell suits and Walkmans were all the rage. Let’s Rock brings together such ubiquitous eighties acts as The Human League, Belinda Carlisle, Chesney Hawkes Tony Hadley plus many more for intense family friendly fun.

The incredible travelling retro festival takes place in Cookham, Bristol, Leeds, Norwich, Exeter, Southampton and London in Summer of 2017. Tickets are on sale right now so get yours before they are gone. Be sure to check out the fantastic VIP options available.

The ultimate boy band are back! Emerging from the late eighties to give a taste of what was to come the following decade, BROS were at the cutting edge of pop and were the first to hint at the possibilities for similar groups to come. The sharp image and hard hitting tunes all contributed to their bad boy image, cemented with such massive songs as Too Much, I Quit, Drop The Boy, I Owe You Nothing and When Will I Be Famous?

Twin brothers Matt and Luke Goss celebrate their return to the spotlight with a huge live performance at The O2 in August of 2017 for what will be one of the most important pop music events of the year.

With the impending release of new Blackberry Smoke album Like An Arrow, the sensational Southern Rock band have announced a springtime tour in the UK to promote the new material. Make sure you see them when they hit a stage near you.

The Alabama boys rose to the fore in 2004 with their debut album Bad Luck Ain’t No Crime, followed some years later by second album Little Piece Of Dixie. However, their breakthrough came with the release of the albums The Whippoorwill and Holding All The Roses which saw Blackberry Smoke dominate the Country Charts in the States, with the new album expected to do even better.

Fans of heavy metal band Trivium are getting ready for their February dates around the UK. The tour takes them to O2 Institute Birmingham, Manchester Academy, Roundhouse in London and infamous Nottingham venue Rock City. We are hoping to hear some great new material at the upcoming dates!

Boy band Lawson can boast seven Top 20 singles and a #4 debut album entitled Chapman Square. They have just announced an exciting October date at O2 Academy Islington at which they will get to show off tracks from their latest album Perspective.

After releasing their wrought but forceful album Stage Four, post-hardcore band Touche Amore have announced a huge upcoming tour in February. Plus, New York singer LP will be rounding up the year with dates at London and Manchester. Keeping it closer to home, we are about to release tickets for Milton Keynes rap metal group Hacktivist, Leeds indie rockers The Pigeon Detectives and for powerful blues rock band The Greasy Slicks.

Folk fanatics will no doubt be excited by the news that two time Grammy award winning singer / song writer John Prine tickets are now on sale. Furthermore, Seattle’s finest folk rock group The Head & The Heart and the epic musician Gregory Alan Isakov have also released tickets for their tours.

Plus, check out the experimental work of Tim Bettinson’s solo project Vancouver Sleep Clinic. His atmospheric music belies his young age revealing a mature talent despite his years.

Other acts coming on sale this week include: Duke Garwood \ Daedelus \ Yonaka

Celebrating ten glorious years, Nottingham day festival Hockley Hustle is back once again to round up all the best talent the cities bourgeoning music scene has to offer. Taking place across the many excellent clubs, bars and venues located in the eclectic Hockley area of Nottingham. Expect everything from hip hop to fun parades, hardcore punk to spoken word during one amazing day raising money for charity. Gigantic are proud sponsors of Hockley Hustle and we know that this tenth celebration will mark a real high in the history of this excellent event.

With the holidays not as far away as you might think, it is definitely time to get your tickets for The Twang’s Annual Christmas Show. This year they will be joined be rabble rousers Cabbage and Swimdeep for a DJ set in their hometown of Birmingham in the third week of December.

We also have some huge names on offer, such as Jeff Lynne's ELO who will be packing out Wembley Stadium in June of next year, Canadian hard rock group Nickelback will hit the UK plus Madchester’s finest; Happy Mondays will take over Derby Arena in October.

Its fast approaching time for Southampton blues rockers Band Of Skulls October tour. Get your tickets before they are snapped up. Plus, Architects will be hitting the road in November.

And finally, other acts you defintely want to check out include: S U R V I V E \ Nouvelle Vague \ Marissa Nadler \ The Strypes