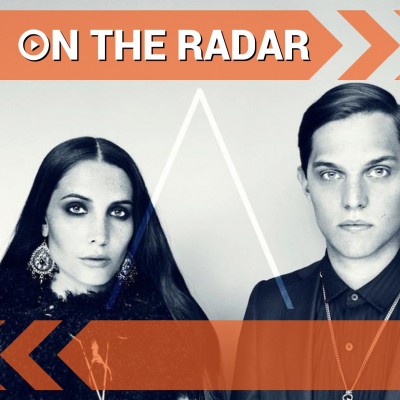 Kingston electronic duo Alpines are poised to release their second album Another River at the end of the month. Teasers of the upcoming release have come through the singles Completely and Heaven which hint towards a confidently mature record with a euphoric Trip Hop sound that allows Catherine Pockson the space to truly show off her fantastic vocals. Unhurried and avoiding any clichéd drop, Bob Matthews continues to prove his fantastic production talents in creating tracks that hold up as both compelling songs and as great club tunes.

The pair have been essential leaders of British dance since their formation in 2010 with their music being quickly co-opted for use by major television shows and used on the catwalk by creative director Hannah Marshall. After a string of superb singles, they collaborated with crucial drum and bass DJ Sub Focus (Nick Douwma) to produce hit track Tidal Wave which broke the Top 20. This was followed by their debut album release entitled Oasis through their very own label; Untrue Records.

Tickets for their February tour are on sale right now. Make sure you get your tickets before they are gone.

With a sound that appears to be deeply steeped in the pioneering work of the BBC Radiophonic Workshop and the avant-garde electronic improvisation of West German krautrock, S U R V I V E produce work that merges the eerily sinister with satisfying arpeggio which feels decidedly European despite being a Texan band.

The pulsating analogue synths present a sense of future whilst also capturing a feel for the past, which are two aspects which seem to have been lost in a post-modern world that appears to have little understanding of what came before or any drive to push culture forwards.

The Austin analogue enthusiasts have recently risen to the fore after being invited by television writers The Duffer Brothers to produce the theme for their cult science fiction horror show Stranger Things. The looming intro complete with nostalgic 80’s inspired music and grainy VHS quality visuals provided the perfect start to the programme.

Having released their new album RR7349 in September, they are currently preparing for UK live dates in the new year.

Click HERE for your S U R V I V E tickets.

Having already endeared themselves to an adoring music press with their debut album Ratworld, indie noise rockers Menace Beach return with the track Maybe We’ll Drown as a foretaste for upcoming follow up album; Lemon Memory.

Somewhat of a supergroup, Menace Beach comprises of Ryan Needham formerly of Komankino, Liza Violet who also works in Department M, Nestor Matthews of Sky Larkin, Matt Spalding of You Animals and MF from Hookworms.

Given that the band is known for their frantic tracks led by Needham’s vocals, Maybe We’ll Drown comes as a surprise with its downbeat feel with Violet taking charge of the vocals and suggest the exciting prospect of a substantial development for the Leeds based band.

We are really excited for the release of the second album and cannot wait to hear the new material at their approaching gigs.