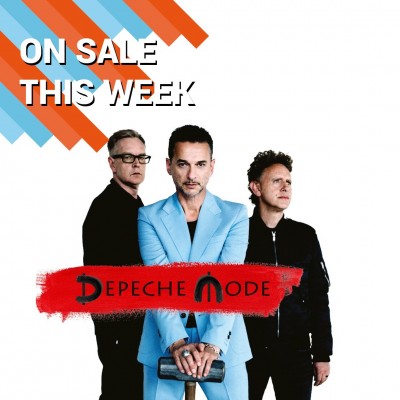 Depeche Mode have continued to be one of Britain’s finest electronic bands since their inception in 1980. The band quickly found fame with their sensational synthpop hit single Just Can’t Get Enough. After domination a decade they emerged into the 90’s with a darker image as revealed on the album Violator which propelled them into international stardom.

They will headline The London Stadium on Saturday 3rd of June 2017 to perform a set including new material from their upcoming Spirit album plus their classics.

Canadian rapper and R&B artist Drake has enjoyed a career which has seen him sell over 20 million digital songs making him the one of the best-selling digital artists of all time, has seen all four of his albums become certified Platinum and receive a Grammy Award plus a further twenty six nominations. Join him in January when he embarks on The Boy Meets World Tour.

The exciting upcoming tour sees Drake perform on some of the biggest arena stages the UK has to offer. Tickets are expected to sell fast so set your reminder now!

They take over Hyde Park in London to promote their exciting new album Revolution Radio. The brand new album unites the energy of their early sound with the deft lyrical skill displayed on their later work to create a modern classic. Be there!

Sum 41 have made their comeback official with the release of their brand new voice 13 Voices. The record was funded by a highly successful crowdfund campaign reflecting the loyalty of their huge audience. The new record features the singles War, Fake My Own Death and God Save Us All (Death To Pop).

The Canadian skatepunks shot to the fore in 2001 with their metal infused singles Fat Lip and In Too Deep as featured on their Platinum certified album All Killer No Filler. Their success has continued with subsequent albums Does This Look Infected?, Chuck, Underclass Hero and Screaming Bloody Murder.

After breaking teenage hearts when they emerged in just after the millennium and a stint of uniting with rival pop punk boyband McFly, Busted are back with their brand new album Night Driver. The mature sounding record accompanies their early hits at the February tour which goes on sale Friday 14th, October.

Gigantic always has a great selection of rock and indie bands and we are about to release tickets for Oxford indie rockers Glass Animals, London punks The King Blues and Cleveland’s finest Cloud Nothings.

Also going on sale this week are excellent electronica artists Sigala and New Zealand band The Naked and Famous.

Other amazing acts we have coming on sale this week include: The Hunna / Hothouse Flowers / Davido / Little Steven / Martha Reeves & The Vandellas

So you didn’t get Glastonbury tickets (or even if you did!) – who cares when you have the excellent Glastonbudget Festival releasing their Early Bird tickets? The Leicestershire festival takes place from 26th – 28th of May and will boast the best tribute acts the world has to offer.

Get your tickets today!

Having just enjoyed another wonderful year, Allen Valleys Folk Festival is now selling Advanced Early Bird tickets for 2017. The folk festivals runs from 29th of September until 1st of October and offers a wonderful experience with the most fantastic folk music taking place in the idyllic Northumberland countryside.

Ultimate boyband BROS have announced extra dates in addition to their London performances which marked their come back. Get your tickets for their nights at Manchester, Nottingham, Birmingham, Newcastle and Glasgow before they are gone.

Las Vegas R&B star NE-YO returns to the UK for an extensive tour that starts in November. See the international celebrity perform on a stage near you.

With the release of their new album Another River, electronica duo Alpines will be touring in February. Do not miss out!

Wondrous baritone singer Richard Hawley is rounding up the year with dates in December. Tickets are going fast so book yours today.

Plus, Nottingham Contemporary have a three terrifically terrifying events for Halloween. Make sure you get to their spooktacular parties.