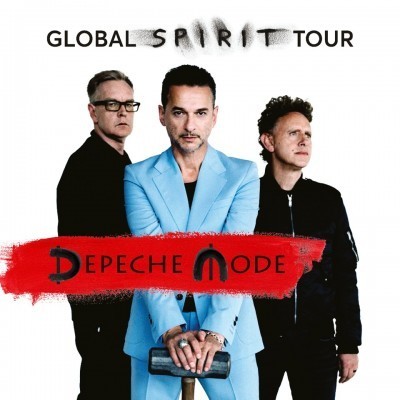 Depeche Mode have announced a headline performance at The London Stadium on Saturday 3rd of June 2017 to promote their new record entitled Spirit to be released next year.

They began as an 80’s synthpop band that began to draw on ever more experimental sounds to then become 90’s electronic rock megastars. Continuing to write and record past the turn of the millennium, Depeche Mode have transcending generations and remain as one of the world’s most important contemporary musical artists.

To get all excited about the upcoming album release and their date at The London Stadium we have listed their five best songs. Take a listen!

Demonstrating once again that the old adage sex sells is correct, Master And Servant peaked at #9 in the charts.

Experimental and hard hitting, People Are People took the avant-garde electronica sound of West German krautrock and gave it a heavy pneumatic punch and became an early industrial smash. Not only did the song rise to #4 in the charts it was also used as the theme song for 90’s CBBC science and technology programme It’ll Never Work?

Despite being popular with fans, band member Martin Gore is known to dislike the song and it has not been played live since 1988.

The band’s most catchy song (with the possible exception of Just Can’t Get Enough), Personal Jesus would be the last Depeche Mode single of the 80’s and feature on their massive 1990 album Violator. The video was directed by Anton Corbijn whose previous work included Atmosphere by Joy Division and would later direct the video for Nirvana’s Heart Shaped Box.

The Gold certified single hit #13 in the charts and has been covered by the likes of Marilyn Manson and Johnny Cash.

The lead single from 1993 album Songs Of Faith And Devotion, I Feel You was the first hint that Depeche Mode intended to explore even darker realms than their previous material.

Continuing in the similar blues rock vein as Personal Jesus, even so far as to bring Corbijn back for the video, but with added extra stomp to be more in line with the domination of heavy alternative guitar music at the beginning of the decade resulted in a massive hit single peaked at #8 in the charts.

The ubiquitous Depeche Mode song, Enjoy The Silence is easily their most recognisable song and includes all their hallmarks including a fusing of rock and electronica, darkly romantic yet brooding lyrics and a grainy metaphysical Corbijn video.

Both a creative and commercial peak for the band, Enjoy The Silence topped the charts in Denmark and Spain, broke the Top 10 in America and peaked at #6 in their home country. It also earned them the 1991 BRIT Award for Best British Single.