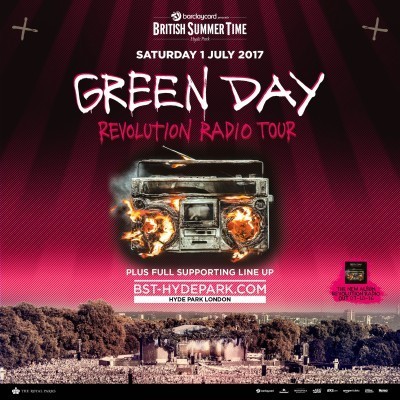 East Bay punks Green Day have been a flurry of enigmatic energy ever since their inception back in 1986. The band developed massively from their early Oi! days to enjoy a career which has seen them grow to become camp fire classics, bestselling Broadway musical producers and political renegades.

Green Day have sold over 75 million records worldwide and can boast a back catalogue which includes such classic albums as Dookie, Insomniac and American Idiot. They take over Hyde Park in London on Saturday 1st of July 2017 to promote their brand new release; Revolution Radio.

We look at some of the highs, lows and crazy antics that have marked an incredibly creative thirty-year career.

Peace and love? Nah, let’s have punk and mud! The original 1969 Woodstock certainly had its fair share of freaks and geeks but by the time its 25th Anniversary arrived a lot had changed in music. The flower power hippies and general good will of the counter culture had long gone and 1994 reflected a peak of nihilism for rock.

Green Day were scheduled to play towards the end of a festival which had already featured the likes of Metallica Nine Inch Nails plus Aphex Twin and endured heavy rain resulting in hundreds of thousands of over excited revellers and mud. Lots of mud.

You can see huge piles of the stuff being flung onto the stage just from the 20:00 mark onwards, shortly followed by the dirtiest stage invaders in the history of festivals. But the chaos really starts when Billie Joe decides to fight back at 28:00 to the sheer glee of the audience. By the end of the set Mike Dirnt endured massive dental damage after being thrown off stage by an exasperated security guard who mistook him for just another stage invader.

The release of the American Idiot album marked a creative high for the band. Incensed by an aggressive American foreign policy in the Middle East, the band led a cultural fightback with a concept album that encompassed punk and folk which explored the story of an anti-hero they named Jesus Of Suburbia.

Using the narrative of an adolescent caught between love and rage, they created a coming of age story which depicts a generations loss of innocence. The album has sold 15 million copies worldwide, and was promoted by videos such as Wake Me Up When September Ends which were more like short films. The punk opera was later developed into a highly successful Broadway musical

Hurricane Katrina struck the western coastline of America in 2005 killing over a thousand people and the resulting floods left many more homeless. The state of New Orleans was hit particularly hard and onlookers were frustrated at the governments sluggish response to the tragedy.

In September of the following year, Green Day collaborated with U2 and producer Rick Rubin to record a cover of The Skids song The Saints Are Coming to raise money for the charity Music Rising to replace instruments lost in the devastation and restore New Orleans to some of its former glory. A live performance of the song complete with Wake Me Up When September Ends, The House Of The Rising Sun and Beautiful Day took place at the Louisiana Superdrome as a mark of respect to the tenacity of the people.

Before you watch this video please be aware that it does contain swearing. An extreme amount of swearing.

Having been invited to perform a full set at the iHeartMusic Festival 2012, Green Day were informed mid performance that their slot was to be slashed in half to give Usher more stage time. This was at a period when Billie Joe was in the deepest throws of alcohol and substance addiction and the provocation of a sign stating they only had one minute left threw the frontman into a full on rage.

His only answer to the indignity of being bumped was to fly off into a foul mouthed tirade complete with destroying his guitar dutifully copied by Mike Dirnt who also proceeds to smash his bass on the stage. The mic was launched into the air as the trio walked off. Billie Joe was entered into rehab the following day.

Who would have ever expected wild man Billie Joe would make an incredible actor? Comedy-drama Ordinary World sees the singer portray a husband and father whose gigging days are way behind him after the band fell into indefinite hiatus when life began to get in the way. With his 40th birthday fast approaching, our hero Perry Miller decides to reunite with old bandmates who appear to have moved on to better things.

The Californian punks have just returned with their incendiary twelve studio album entitled Revolution Radio. The album unites the energy and back to basics punk of their early work but continues the mature political polemic they adopted in the wake of the Bush administration with American Idiot to create a modern classic and a true gem to take them forward for another thirty years!