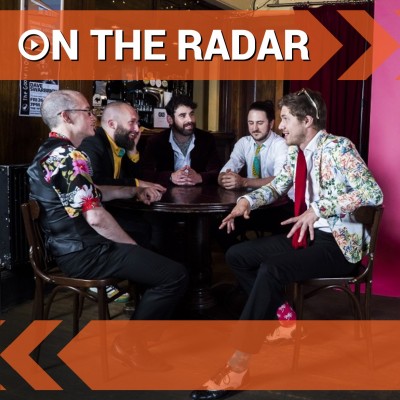 Purveyors of sublime pop, Molotov Jukebox are ready to warm your cockles with an Autumn / Winter tour to promote their latest record; Tropical Gypsy. The tongue in cheek band released their second album earlier in the year following a highly successful crowdfunding campaign which contains the sizzling single Pineapple Girl.

The London Gyp-step six piece is led singer and accordion playing actress Natalie Tena, best known for her roles in Harry Potter (Nymphadora Tonks) and Game Of Thrones (Osha), and is joined by powerful trumpets, gypsy violin and massively pounding percussion to drive ecstatic audiences wild. Having toured the world and played all across the UK, over the rest of Europe and even so far as Mexico, they continue to reach ever greater numbers of spectators which add to their surging fan base.

With their hot Latin rhythm sure to keep the chill at bay we can’t think of anyone better to go see this November and December. Book your tickets before they are gone!

Australian twins Andy and Toma Banjanin formed psyche group Tempesst with Eric Weber, Jesse Hutchence and Kayne Reynolds in May of 2015 after relocating to London. After showing massive promise with the release of two incredible songs Tidal Wave and Too Slow its hard to understand why this blissful band with their resplendent summer groove still remains unsigned. The two songs brim with confidence and both come accompanied with faux retro videos which make for compulsive viewing.

Following their performances at The Great Escape, NME Awards 2016 and supporting Albert Hammond Jr’s most recent solo tour, the band have returned with their new single Broke Down Blues which they teased the release of with THIS FANTASTIC ROOFTOP ACOUSTIC PERFORMANCE back in August. The new video to promote the studio recorded version sees an antihero jack in his mundane job in favour of a life of danger.

Be at Notting Hill Arts Club in London on Sunday 6th of November when they are joined by Krusoe, Holy Now, Callum Beattie, River Matthews and Alex Francis for an amazing evening of great acts.

Superb outlaw country band Turnpike Troubadours have been releasing their rousing popularist bluegrass Cajun rock since 2007. The Oklahoma Red Dirt band cut their teeth with their self released debut album Bossier City which is followed by Diamonds & Gasoline and Goodbye Normal Street.

Their fourth album was eponymously titled The Turnpike Troubadours which contains the impassioned The Bird Hunters, a waltz choked with melancholy, as the intro to a visceral record crafted by a band that both creates a pull of emotion to the heart and satisfies the mind with the accurate description of exhaustion of yet another hard day’s work.

Don’t miss your chance to see them tour in February of 2017. Tickets are now available.