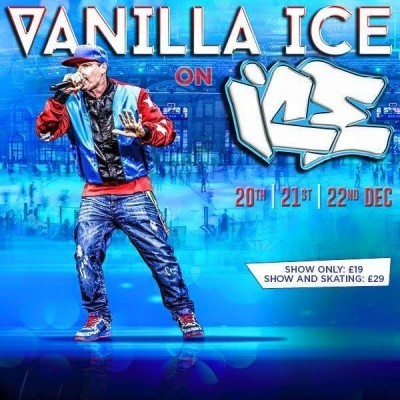 Anybody looking to enjoy the festive period with something truly electrifying will be no doubt be delighted to hear the announcement that international superstar rapper Vanilla Ice invites you to see him perform – whilst you ice skate!

Vanilla Ice shot to fame after his album To The Extreme became the fastest selling hip hop album of all time in 1990. The Platinum selling album reached #1 in the UK charts and in the States where it remained at the top for sixteen weeks. See him perform all of his hits whilst you enjoy the ice including, of course, the smash hit single Ice Ice Baby!

This unique show merging the exhilarating experience of a world famous live performance with the giddy thrill of skating will take place at the amazing Alexandra Palace located in beautiful North London for nine exciting shows which run from Tuesday 20th till Thursday 22nd of December.

The extremely exciting upcoming events are brought to you by the fantastic event promoters Cuffe And Taylor.

“We’re sure that these three nights of concerts are going to be hugely popular and a fabulously fun way to start the festive period.” - Peter Taylor, Cuffe And Taylor Director

Vanilla Ice is no stranger to the ice himself. The Texan Hip Hop sensation appeared on the sixth season of the hit ITV series Dancing On Ice where he was able to display both his outstanding dance and skating skills to various hit singles including his very own super smash hit; Ice Ice Baby.

“Vanilla Ice on Ice is going to be a truly unique experience giving people the chance to skate during the concert. Vanilla Ice is a firm favourite with people of all ages and since his appearance on Dancing on Ice he clearly has a passion for ice skating.” - Peter Taylor, Cuffe And Taylor Director

Gigantic only has limited tickets available and given the high demand we do advise you to book early or risk missing out on an amazing way to see out the year!

Click HERE for your Vanilla Ice On Ice tickets.