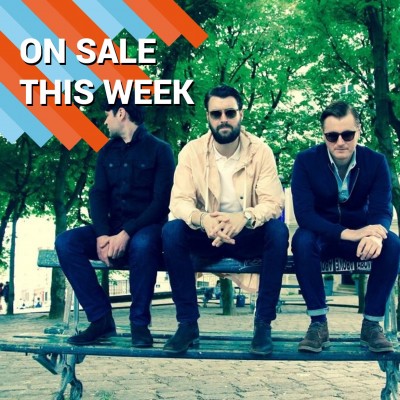 With the upcoming release of impending new album Mapping the Rendezvous comes the thrilling news that Middleton’s finest band Courteeners will be gracing the stage of Emirates Old Trafford at Manchester during May of 2017. Tickets to be released at 09:00 on Friday 21st of October.

The indie rockers have continued to impress the music press and gather an ever growing audience since their inception in 2006, having previously released the albums St. Jude, Falcon, Anna and Concrete Love.

Ultimate 80’s icon Rick Astley continues to prove that he will always be the man of the moment now that his latest album entitled 50 has shot to #1 in the UK album charts. Released in early October, the heart throb’s seventh studio album has already been certified Gold after selling more than 100,000 copies in his home country alone!

Astley has been a household name ever since he released Never Gonna Give You Up which topped the charts in 25 countries. Having sold more than 40 million records worldwide, he remains a formidable force in the world of pop.

Sensational soul monsters Fat Freddy’s Drop have just announced two exciting dates taking place at Manchester and London in June of 2017. The two nights promise to be brimming with effortless cool tunes which are the perfect accompaniment for a hot summer night.

Gigantic offers you the chance to buy tickets for this unique experience which consists of nine exciting shows which run from Tuesday 20th till Thursday 22nd of December that take place at the amazing Alexandra Palace located in beautiful North London.

Vanilla Ice shot to fame in 1990 with his Platinum selling album to the extreme which featured the colossal song Ice Ice baby.

Click HERE for your Vanilla Ice On Ice tickets.

Released at the end of this week are tickets for essential Icelandic rock act Kaleo. Promoting their newly released album A/B, they will perform at London in January and Birmingham during February due to massive popular demand following their sell out shows taking place this year.

Brothers and founding members of Sepultura Max & Iggor Cavalera will celebrate twenty years of their landmark album Roots with a huge November show at O2 Forum in London which goes on sale on Friday.

As ever, we have even more excellent rock acts about to come on sale such as the high octane wild  Norwegian group KAKKMADDAFAKKA, Balitmore pop punk band All Time Low plus The Recoys lead singer Hamilton Leithauser is about to release tickets for his London gig. And for those who truly love their music heavy, Utah Deathcore band Chelsea Grin also release their tickets this week.

Other big names about to come on sale include; Melanie C \ Dreezy \ Tempesst \ Thirdstory

The Midlands premier roots and acoustic festival Gate To Southwell Festival is now on sale. Taking place on the grounds at Southwell Racecourse from Thursday 8th till Sunday 11th of June of 2017, acts confirmed so far include Kate Rusby, Jon Boden and BOC with more yet to be announced.

Early Bird tickets are currently on sale but not for long so book yours before they are gone!

Click HERE for your Gate To Southwell Festival tickets.

Metropolitan festival Outlines takes places on a single day at some of the very best stages the culturally rich city of Sheffield has to offer. You can see the very best in rock, hip hop, dance and more plus film screening and art exhibitions.

Super Early Bird tickets have now been released and are not expected to last for long so book early!

Boasting the likes of Bat For Lashes, Allah- Las, Fucked Up, Bill Ryder-Jones and many more, Mirrors takes place on Saturday 29th of October at various venues across happening Hackney.

Saving the best till last, Mirrors is one of the final festivals of the year and we have a handful of tickets left.

The original Rocket Man Elton John and his band have announced their Wonderful Crazy Night Tour which begins early in June of 2017. Expect to hear such classic hit singles as  Pinball Wizard, I’m Still Standing, Nikita, Don’t Go Breaking My Heart, Sacrifice, Don’t Let The Sun Go Down On Me, Something About The Way You Look Tonight, Are You Ready For Love? Tickets now on sale!

Taking place on Saturday 22nd of October, Firework And Music Festival 2016 offers a great night out and promises to bring plenty of bang for your bucks. Not only will you enjoy a stunning choreographed firework display but there will also be great live music too!

Foodies everywhere rejoice, because we have tickets for the Great Food & Drink Festival. Travelling the country in May of 2017, the festival offers a range of celebrity chefs and culinary delights which will all make for an unmissable event.

Gigantic has some of the biggest names in music on sale. Right now you can get tickets for the one and only Donny Osmond. His appeal has endured since his teen idol days in the 60’s and continues to play to adoring crowds. And don’t miss your chance to see classic R&B stars Martha Reeves & The Vandellas when they tour this December.

Alternative audiences are in for a treat now that indie club night This Feeling have announced their tour. Travelling round the country playing the likes of Carl Barat, The Hubbards and The Waives with The Cribs on hand to Dj. Also on sale are Aussie psyche master Jagwar Ma who are hitting the UK to promote new album Every Now And Then. Plus, we have a limited amounts of tickets left for the superb post punks Savages and Crass singer Steve Ignorant.

The ever experimental Biffy Clyro recently released the latest album Ellipsis in June. The promote their new record with two electrifying dates at Birmingham and London in December.

And finally, other blisteringly exciting events we have on sale are; Bluesfest \ Davido \ Graeme Park \ Blue House