Known and loved all over the world, Nickelback are a hard rock band that draw influence from nineties grunge and the alternative metal that preceded it. Enjoying massive sales as the Canadian band dominate rock and pop charts all around the world and continue to conquer all in their path.

Originally small town boys, the band started life in their hometown of Hann, Alberta, where they spent their early years practicing hard before hitting the road. Before becoming the monsters of rock they are today, they extensively toured rural Canada playing tiny clubs for beer and change. The name idea came to band front Chad Kroeger who would give customers their change and say “Here’s your nickel back” whilst working at Starbucks.

The Vancouver based quartet borrowed the money to finance the recording of their first album Curb. Finished and released in 1996, the record caught the attention of label EMI and were soon signed.

Now backed by a major label Nickelback were able to develop into the hard rock band we know today. Second album, The State, was released in 2000 and saw the band climb the independent charts.

2001 saw a sea change for the group. Kroeger’s talents of song writing developed considerably and he soon penned the hit single How You Remind Me. The 2001 smash single meshed hard rock power chords with memorable hooks, melody and romantic lyrics which resonated with an international audience. The accompanying album Silver Side Up sold eight times platinum.

Now, the band regularly find themselves playing in front 35,000 strong fist pumping audiences and have done so for well over a decade. They have played twelve consecutive sold out international tours.

They have released 23 singles including such massive tracks as Far Away, Photograph, Savin’ Me, Someday and Rockstar.

They are a World Music Award recipient for World’s Best-Selling Rock Artist and have been hailed as Rock Group of the Decade by Billboard.

The Canadian rockers are set to rip through the UK with some amazing stadium shows this October. Nickelback’s huge tour takes them to Motorpoint Arena in Nottingham, Genting Arena in Birmingham, Sheffield Arena, The SSE Arena Wembley in London, Manchester Arena, The O2 Arena in London, Liverpool Echo Arena, SECC The Hydro in Glasgow and Metro Radio Arena in Newcastle.

Nickelback tickets are on sale through Gigantic right now. Be sure to get yours! 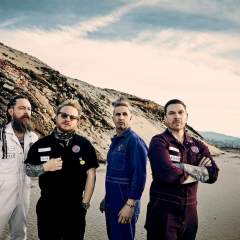 That's all we have for Nickelback! Check out their upcoming shows