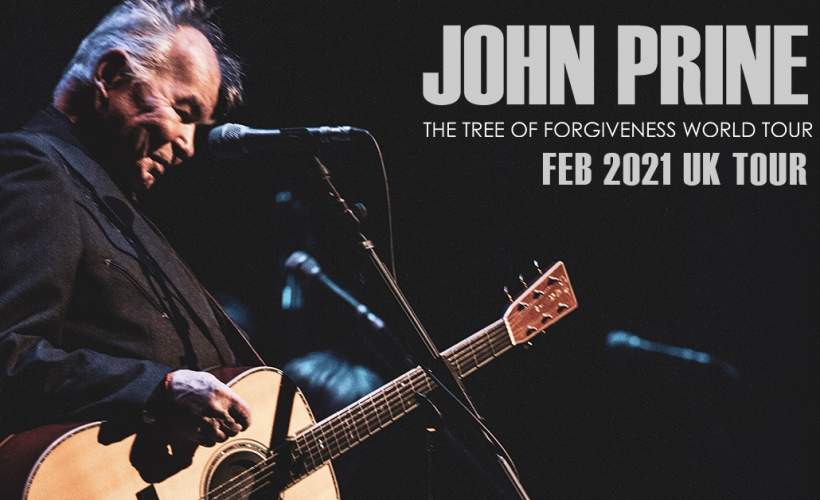 "John Prine at the London Palladium"

Another fantastic show by John Prine and his amazing Band

Absolutely an amazing concert, John Amanda and musicians fantastic. Tremendous value for money. Would see them again if possible.

A Great Show by the Great John Prine. John had the packed Palladium audience on their feet to applaud his 2 hour marathon. MIxture of old and new, with favourites; Hello In There; Lake Marie; Speed of the Sound of Loneliness worth the admission alone.

"JOHN PRINE AND T HOLE BAND WERE T BOLLOCKS.. TERRIFIC MUSICIANS FROG MY WIFE AND MYSELF HAD A GREAT"

WE LOVED IT. HES A GREAT PERSON OL JOHN. T BAND WERE SPOT ON REEL PROS. IT WAS A PLEASURE 2 B THERE .. THANK U ALL... IF U R EVER ROUND PLUMSTEAD IN LONDON COME IN 4 A JACK DANIELS N A CHEESE BURGER.. GREAT SHOW.. LOVE U MR PRINE... MY WIFE FROG IS FROM TRALEEE.. SO GALWAY AINT FAR AWAY.. U COULD INVITE US UP 4 TAY N CAKE N PLAY T BLACKBIRD 4 US.. LOVE TRISHA N MARTIN... X

John Prine announces The Tree Of Forgiveness World Tour which takes him to The Bridgewater Hall in Manchester or Monday 8th of February 2020.

Gigantic make the booking process even easier by allowing you to set a personal reminder. This will stop you missing the release of gig tickets for your very favourite act by sending you a text message or an email just before they become available online. John Prine gig tickets are released at 10:00 on Friday 20th of March.

Two time Grammy-Award winner, John Prine, is a singer songwriter who, from his eponymously titled first LP release in 1971, has continued to write and perform songs that have become central to our American musical heritage. Classics like, ‘Angel from Montgomery’, ‘Sam Stone,’ ‘Paradise,’ and ‘Hello in There’ speak to the everyday experience of ordinary people with a simple honesty, and an extraordinary ability to get right through to the heart of the listener.

Everybody wants to get their hand on John Prine tickets so you will need to act fast and book yours before they all go. Gig tickets orders with Gigantic can be placed 24/7 at home or away using your tablet, computer or smartphone. We also recommend you set a personal reminder to alert you with a text message or an email when they become available.

Prine continues to sell out shows worldwide including recent concerts at Radio City Music Hall and Red Rocks Amphitheatre among many others. After a sold-out inaugural year, his music festival, All The Best Fest, is confirmed to return in 2020.

There are only limited supplies of John Prine concert tickets being made available by the event promoters so with the demand ever growing you will need to act fast or risk missing out. Gigantic is the home of a massive array of essential gig tickets, so take advantage of our customer services famed for its excellence and always come to us to book your big night out!