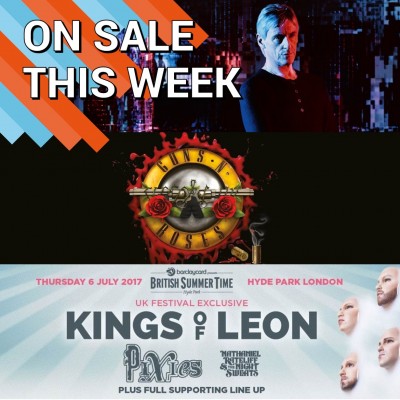 Ultimate rock band Guns N' Roses have shocked and thrilled the world for over 30 years. Led by Axl Rose, they have sold over 100 million records worldwide including their blistering debut album ‘Appetite For Destruction’ placing them amongst the biggest selling artists of all time. They have just announced that they will play at The London Stadium on Friday 16th June, 2017.

Now reunited with original guitarist Slash, you can hear such hits as ‘It’s So Easy’, ‘November Rain’, ‘Paradise City’, ‘Knockin’ On Heaven’s Door’, ‘Welcome To The Jungle’ and ‘Sweet Child O’ Mine’ played as they were meant to be – live!

Having sold over 2 million tickets for their 2016 stadium concerts alone shows that demand is insanely high. So, get ready for their release at 10:00 on Friday by setting your reminder with Gigantic right now.

Exploding onto the scene a flurry of excitement in the late 70’s, Paul Weller emerged as the leader of the mod revival with The Jam. Incorporating 60’s influences with the ferocity of punk, Weller’s sharp intelligence and sheer onstage presence forever marked him as one of the greatest showmen of all time.

The Modfather has always remained at the cutting edge of music, having constantly reinvented himself with the soul band The Style Council and achieved even greater fame with a solo career which has seen him embrace such wide influences as folk, rock, R&B and electro.

Join him in April 2017 when he embarks on a spring tour which takes him to a stage near you.

Southern rock superstars Kings Of Leon became household names after releasing a string of hits including ‘Radioactive’, ‘Use Somebody’ and their signature song ‘Sex On Fire’.

The Nashville quintet have recently announced that they will be taking over Hyde Park in London on Thursday 6th July 2017 for a huge outdoor headline event perfect for the hot summer days.

Joined by the likes of such great bands as Pixies plus Nathaniel Rateliff & The Nightsweats, you can be guaranteed of an unforgettable day of incredible music. So with only limited tickets available you need to book before they are gone!

The Charlatans were born out of the hedonistic Madchester days and quickly began to rise in the charts with psychedelic songs of joy and northern culture. Led by cheeky singer Tim Burgess, the Manchester lads have been a mainstay of festivals and indie discos for over quarter of a century.

They will be making a huge headline performance at Scarborough Open Air Theatre on Friday 16th of June 2017. Join them to hear such essential indie hits as   ‘How High’, ‘Tellin’ Stories’, ‘North Country Boy’ and ‘The Only One I Know’.

Taking place in April, Handmade 2017 is one of the first major music events in the year. The young festival has already forged a reputation for rounding up a stunning array of up and coming acts attracting a cool crowd looking for the next big thing. In picking rising stars, Handmade often hints at the future sound of the rest of the year.

We have already sold out of Early Bird tickets so with only limited supplies of tickets left you need to book early!

Fans will be excited to hear Jess Glynne has announced a headline performance at The Falkirk Stadium on Saturday 5th of August. The London singer topped the charts with her hits ‘Hold My Hand’ and ‘Don’t Be So Hard On Yourself’. Tickets are released at 09:00 on Friday.

Star from The X Factor Olly Murs has announced an extensive tour for the scorching summer of 2017. After hitting #1 in the charts with debut single ‘Please Don’t Let Me Go’, Murs secured his celebrity status and continues to wow crowds with every performance.

Californian metallers Primus will be making a rare UK performance in 2017 when they will be playing at Roundhouse in North London. Set your personal reminder now to be ready for their release.

Also going on sale this week, we have;

Those in the know always mark Field Day in their music calendar. The East London festival brings together some of the most highly sought

Having made their first wave of announced acts which include electronica god Aphex Twin, spaced out psyche band King Gizzard & The Lizard Wizard and shoegaze sensations Slowdive we have seen ticket sales start to rise. With even more to come you better book early or risk missing out!

Family friendly festival Gloworm is a brilliant two day event designed especially with your little people in mind. Offering such excellent entertainment as art, music and theatre, people of all ages will have a truly memorable time.

So come to Clumber Park at Worksop in August for a wonderful weekend that has been recommended by real families.

Art, music and science project BE is an event like no other. Using ground breaking technology developed by Dr Martin Bencsik the sound of bees working in a neat by hive will be streamed in real time to St Mary’s Church in Nottingham to be combined with a performing orchestra. Imagined by artist Wolfgang Buttress, the critically acclaimed performance will take place next week.

Award winning singer Agnes Obel creates delicate and intricate music by weving stories in the listener’s imagination, urged on by the gentle piano that accompanies her sweet voice. These stories conjure imagery of nature, longing and the adventure of exploring. See her headline at Roundhouse in London next year.

And finally, other events you really need to get tickets for are: