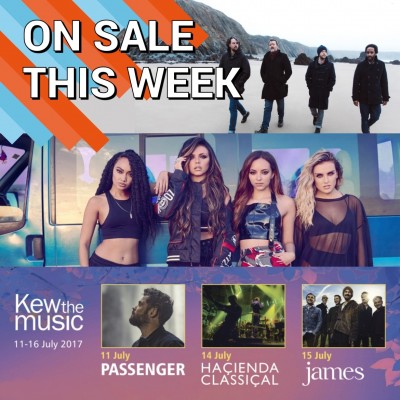 After exploding onto the scene as contestants on The X Factor, Little Mix have fast become the biggest band around. As they grow in confidence with each new album release, they delve deeper into their passions and reveal even greater singing talents to their ever-growing loyal audience.

The sassy five-piece enjoyed an incredible year which saw them release the massive #1 single Shout Out To My Ex which propelled their latest album Glory Days to the top spot and take #1 in the album charts where it has remained since November.

Now they return for a scorching summer tour which takes them to some of the hottest stages all across the land. Click the link below to check out where they play and set a personal reminder getting you ready for their launch at 09:00 on Friday 20th of January, 2017.

Each year, Kew The Music offers a magical experience by hosting an entire week of unique musical events at the beautiful grounds of the Royal Botanic Gardens in Kew. Running from the 11th until the 17th of July, you can make the most of the perfect picnic weather with the fine music.

This year it returns with an incredible line up that offers something for everyone. Look forward to enjoying folk rock band Passenger performing all their recent hits live, Haçienda Classical reinterpreting the Madchester days of rave with a full orchestra plus indie icons James will regale you with the very best of their flawless back catalogue.

So, join Kew The Music to be part of one of the most exciting musical events in 2017. With tickets expected to sell fast upon their release, we suggest that you set a personal reminder to arrive to you via text message or email alerting you as to when they become available.

Award winning alternative band Elbow inhabit the very heart of melancholic rock. Producing a sweet wistfulness feel of nostalgia whilst simultaneously always remaining urgent and modern, Elbow tap into the traditions of the past and ally themselves with progress to become modern anthemic greats.

The Bury boys are just about to release their seventh studio album entitled Little Fictions. Expected to be out at the beginning of February, the brand-new album includes collaborations with The Hallé Orchestra and features the singles Magnificent (She Says) and All Disco.

And now they have just become the latest act to be announced as a headliner for the fast-approaching Forest Live dates. Taking place in spectacular woodland settings, the shows are hosted at some of the most picturesque sites Britain has to offer.

With the upcoming Great Food And Drink Festival events, foodies everywhere are looking forward to sampling the delights from the hundreds of stalls offering a vast range of mouth-watering morsels. The family fun includes children’s entertainment in addition to the product demonstrations and cooking demos.

There will be plenty of famous faces on hand to spill the beans and let you in on the trade secrets. Make sure you catch the likes of Nancy Birtwhistle, Rustie Lee, Tom Kerridge, Gregg Wallace and more while they are in the kitchen.

The touring show takes place at a variety of prestigious locations including Markeaton Park at Derby, Newstead Abbey at Ravenshead, Lincoln Castle and Hardwick Hall in Derbyshire so you can enjoy all the Great Food And Drink Festival has to offer at a venue near you!

Click HERE for your Great Food And Drink Festival tickets.

One Sale This Week

Released on Friday, we have tickets for international superstar Belinda Carlisle. After finding fame as the singer of The Go-Gos, Carlisle became a solo artist and became a household name with hits like Circle In The Sand, Leave A Light On and Heaven Is A Place On Earth. With the impending release of new album Wilder Shores, she tours the UK later in the year to promote the new material.

Also, just about to be released are tickets for Canadian pop punk band Marianas Trench. With four awesome albums under their belt you can expect each night of the tour to be absolutely amazing showcasing their high-energy performances.

Other must have tickets going on sale this week include:

We are tremendously exciting about the upcoming Outlines 2017. Uniting some of the steel cities best unique independent venues such as Plug, The Harley, The Leadmill, Bloc Projects and Queens Social Club for a weekend of the very best acts from a wide range of genres.

The line-up promises to be all killer no filler, with  Jagwar Ma, The Selecter, Slow Club, The Crookes and more all taking part.

Rock & Bike Festival brings together the biking culture with some good old rock and roll. In addition to the Custom Bike & Trike show and competition, you will also be treated to live sets by the likes of Dr. Feelgood, Girlschool, The Quireboys and many more!

The festival also offers great food stalls, day time entertainment plus plenty for the kids to do including face painting and rides ensuring that the whole family has a great time.

For further fantastic festivals, check out:

UB40 featuring Ali Campbel, Astro and Mickey are touring in May and June. One of the most successful bands in British pop history, they have achieved sales of 100 million albums worldwide and released over 40 Top 40 singles including such titles as I Got You Babe, I Can’t Help Falling In Love With You and Red Red Wine.

Perfect pop pairing; brothers Fred and Richard Fairbrass make up the two halves of Right Said Fred. The dynamic duo are responsible for such chart toppers as Deeply Dippy, Don’t Talk Just Kiss, Stick It Out and (of course!) I’m Too Sexy. They play Heaven in London during May.

And finally, other must have tickets on offer from Gigantic are: