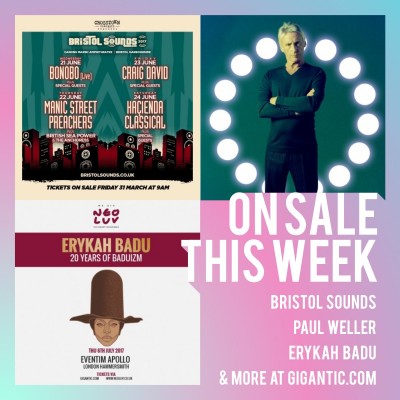 The events are spread across the scorching summer month of June and take place at the incredible Canons Marsh Amphitheatre. With tickets expected to sell fast, we advise you set your personal reminder right now!

Bristol Sounds tickets go on sale at 09:00 on Friday 31st of March.

Get excited because the Modfather is back! Having first led the seminal punk rockers The Jam before forming new wave band The Style Council, Paul Weller is now recognised as one of the world’s greatest song writers who enjoys worldwide fame as a solo artist.

With the release of his upcoming album A Kind Of Revolution, Weller has announced exciting new live dates to promote the brand new material plus hits from his impeccable back catalogue.

Erykah Badu is amongst the greatest neo soul performers. She exploded in 1997 with the release of her triple Platinum debut album Baduizm and has subsequently seen her success grow with a further four studio albums and the double Platinum live album simply titled Live.

See her celebrate the 20th anniversary of her ground-breaking debut album when she performs it in full at Eventim Apollo in London.

Hola! London has round up the world’s very best performers of Latin music for one unmissable day festival. See Grammy Award winners Juan Luis Gerra and Juanes team up, plus performances from David Bisbal and Sebastián Yatra.

So, get yourself down to The O2 Arena in London on Saturday 22nd of July for a fun filled fiesta for all the family to enjoy music, dancing and tasty street food.

As these tickets will sell quickly for each event, you will need to book quickly to avoid disappointment.

Formed in retaliation to the rise of racism and reactionary politics during the recent presidential elections in the US, Prophets Of Rage is an incendiary rap / rock supergroup that unites the considerable talents of drummer Brad Wilk, guitarist Tom Morello and bassist Timothy Commerford of Rage Against The Machine with DJ Lord and Chuck D of Public Enemy plus rapper B-Real from Cyprus Hill. Join the revolution when tickets go on sale at 09:00 on Friday 31st of March.

Sparks have continued to be at the forefront of art rock inflected pop for over forty years, thrilling critics and fans with such hits as Amateur Hour,  When Do I Get To Sing “My Way” and This Town Ain’t Big Enough For The Both Of Us. The Mael brothers return with their new album Hippopotamus and tour the UK in September. Set your personal reminder with Gigantic right now.

Further awesome acts coming on sale this week include:

Folk By The Oak

Find yourself at the beautiful surroundings of Hatfield House for Folk By The Oak. The day festival offers Levellers, Kate Rusby, Eric Bibb plus much more.

Folk By The Oak tickets are on sale right now.

Other festivals you need to know are:

Prepare for the wildest journey in millions of years! Dinosaurs In The Wild brings to life the mighty lizards of prehistory. Make your way to TimeBase 67 where time-travelling scientists return to the deep past to study dinosaurs in the natural habitat. The marvellous experience has been created by the team behind BBC’s Walking With Dinosaurs. Dinosaurs In The Wild takes place at Birmingham NEC Exhibition Halls and Manchester Event City and tickets are already on sale.

The darling of indie rock; Evan Dando has just announced a handful of UK dates to take place in May. The Lemonheads singer fuses the emotive strength of folk with the energy and power of punk to become an underground hero who has now been inducted into the Boston Music Halls Of Fame.

And finally, Gigantic is always the best place to book your big night as we have all the essential gig tickets. Check out what else we have on sale: