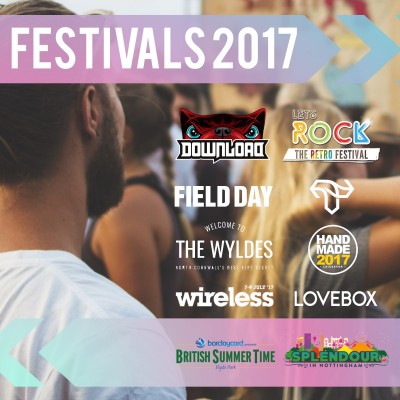 With the clocks going back and the nights getting shorter we thought it was the perfect time to share our festival list for this year. We have some of the best festivals on sale from April to October, ranging from rock to dance, cutting edge plus retro, offering something for everyone.

So, take a look at our list and find the right festival for you. Book your tickets, grab your tent and wellies and you’re ready for your big weekend!

Let’s Rock unites the very best acts from the decade which brought you leg warmers, massive shoulder pads and the Rubik’s Cube. Families are encouraged to dress up as their favourite star as they boogie away to the awesome music.

The traveling festival takes place at numerous locations all over the UK, starting in May and continuing till July. So, make sure you book your tickets and look forward to all the fun coming to your town.

Live in the Wyldes

Set in a scenic valley in north Cornwall, Live in the Wyldes is held at a customer made site very close to the beautiful beaches for which the region is fames.

The wonderful weekend plays host to Brit Award winning singer-songwriter Rag’N’Bone Man plus synthpop legends The Human League with a further spectacular Saturday headliner yet to be announced. Be there!

Live in the Wyldes tickets are on sale right now.

Field Day is an annual celebration of the world’s best alternative acts at Victoria Park. The East London event works as a showcase of essential emerging acts and always has huge headliners.

The action-packed weekend takes place at The Big Park at Buckinghamshire. They offer pre-pitched camping enabling you to camp in comfort without the hassle of bringing your own tent.

Award winning metropolitan festival Tramlines is the biggest musical event on the Sheffield calendar. The festival stretches across the city centre to become one enormous party.

This year, the many names taking part include Primal Scream, Kano, The Big Moon, The Libertines, Loyle Carner and so many more.

Community Festival celebrates the best in new music by presenting some of the very best names currently coming through. Look forward to the likes of Catfish And The Bottlemen, Slaves, The Wombats, The Hunna and Nothing But Thieves.

Tickets for this one day festival at Finsbury Park and selling fast so book yours before they are gone.

Splendour In Nottingham is a huge party for everyone in the city and the surrounding areas. Set against the picturesque backdrop of Woollaton Hall and the beautiful surrounding grounds, each year is more spectacular than the last.

Splendour In Nottingham tickets are on sale right now.

The Shrewsbury Folk Festival returns for a wonderful weekend of ceilidhs, live traditional music and fabulous festivities. An exciting holiday for all the family, with plenty of tasty food to try and lots to see and do.

The list of acts taking part is near endless, so you know the music will never stop throughout your delightful weekend.

Children everywhere are invited to join a festival designed with them in mind. Gloworm Festival features awesome activities, fun rides, activity workshops plus great music. There will also be guest appearances from Dick & Dom and Mr Bloom.

So, bring your little people to Clumber Park in Worksop for a wonderful weekend on Saturday 19th and Sunday 20th of August.

Go big or go home! Lockdown Festival is the massive dancer weekender for those of you who are properly up for it.

The three day blow out features the likes of Wiley, Sigma, Dizzee Rascal, Gorgon City plus Chase And Status taking place during the first weekend of September at Exeter’s Powderham Castle. You just know it’s going to be good.

Probably the final festival of the year, Hockley Hustle is a showcase for the finest acts to emerge out of the burgeoning Nottingham music scene. Uniting the various venues around the quirky Hockley area, you are guaranteed to find something truly amazing.

The urban party always has a few surprises in store, with previous years seeing performing acrobats, street parades and an outside silent disco which all adds to the carnival atmosphere. The extraordinary event raises money for such good causes as Refugee Forum, CYF Project aiding disadvantaged children and homeless charity Framework. Hockley Hustle is proudly sponsored by Gigantic.