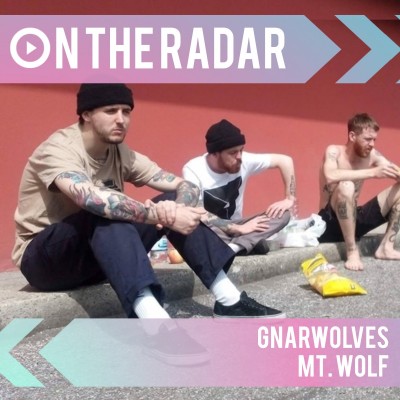 Upbeat punk band Gnarwolves draw on the brighter side of the hardcore spectrum to create a brash but anthemic sound which sees them on the cusp of making the leap from cult band to mainstream success.

The Brighton based band formed towards the end of 2011 and quickly self-released their debut EP Fun Club which would prove to be so successful it would be picked up by Tangled Talk Records for a second release with a few added covers which would be promoted by heavy touring over the next two years.

Whilst on the road the band began to build a core of loyal fans, drawn to their infectious songs and confident live performance, only taking time out to return to the studio to create furthers EPs CRU and Funemployed which would benefit from praise from such high-profile publications as Kerrang! and Rock Sound.  Bolstered by the media attention, Gnarwolves re-released their previous material by combining the EPs into the compilation album Chronicles Of Gnarnia which did much to spread their name further but the need for a debut album was growing.

Benefitting from Zane Lowe pushing the single Smoking Kills on his BBC Radio 1 Show and the underground support they had built through rigorously gigging, their eponymously titled album was released through Pure Noise Records in September of 2014 and shot to No. 4 in the UK Rock Charts.

Now they prepare for further success with the impending release of follow up record Outsiders. The second album is released on May 5th and sees the boys hitting a stage near you once more.

Gnarwolves tickets are currently on sale.

It’s been a rocky road for ambient folk trio Mt. Wolf. Having originally formed in 2011 the band would soon split citing the classic ‘irrevocable creative differences’ as the reason, only to return a year later with renewed vigour. They have certainly benefitted from the time out which preceded their second incarnation has seen their success massively improve having just returned home from playing SXSW in Austin, Texas for a second time and are currently taking pre-orders for their debut album Aetherlight which is expected to be an independent smash hit.

Mt. Wolf take a unique stance, fusing traditional guitaring and tender choir vocals with gentle electronic instrumentation to great emotive effect. Their moving swell builds to a subtle euphoric explosion creating a little space of warmth in the listener’s heart, each song imparting further moments of joy on the audience.

So, join them when they play Hoxton Hall in London plus The Eagle Inn at Salford during June where you will be treated to the future sound of folk as Mt. Wolf expand from the smaller stages to bigger things.