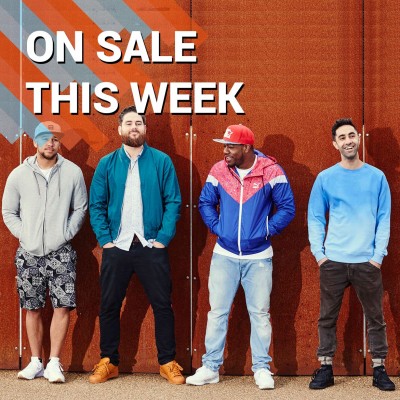 Brian Wilson has just announced that he will perform the iconic Beach Boys album Pet Sounds in celebration of the records 50th Anniversary at a one off event at the esteemed Royal Albert Hall. The record marked a sea change for contemporary pop music upon its release in 1966 with its innovative vocal and instrumental arrangements as featured on such ubiquitous songs as God Only Knows and Wouldn’t It Be Nice.

Don’t miss your chance to see a true living legend performing Pet Sounds in full followed by other songs from his rich body of work.

V Festival is the ultimate pop event of the year and gathers together the biggest names for a weekend you will remember for the rest of your life. Where else can you see such megastars as Justin Bieber, Rihanna, David Guetta, Sia, Faithless, Kaiser Chiefs and Jess Glynne performing alongside each other at one humungous party?

The festival simultaneously takes place at Hylands Park at Chelmsford and West Park in Staffordshire across Saturday 20th and Sunday 21st of August.

Premier drum and bass band Rudimental will be taking over Times Square in Newcastle for an evening of stunning live music. The MOBO Award winners have dominated the charts with such spectacular tracks as Bloodstream, Feel The Love and Waiting All Night.

They also feature in the line-up for the amazing dance festival Lockdown where they will appear alongside Tine Tempah, Katy B, Sigma and more.

Jack Savoretti has continued to be amongst the most compelling pop acts since he emerged on the scene in 2006. His latest album is titled Written In Scars and broke the Top 10 upon its release at the beginning of 2015 and was appointed Album Of The Week by BBC Radio 2. Having sold nearly a million copies the record looks set to become a modern classic.

The heartthrob guitarist returns to perform regional dates around the UK allowing you to see him perform on a stage near you.

South London rap collective 67 have been recruiting an army of fans with their powerful videos and fusion of Chicago and British beats. Their tracks Needy, Lets Lurk and Traumatised 2 talk about the harsh reality of inner city life. Tickets for their September tour are released at 09:00 on Friday 5th of August.

BRIT Award winner Kate Nash has got everyone excited with the news that she will soon be releasing an as yet unnamed single and that she will also be touring in Autumn. Known for her girl-next-door indie pop hits, the single will be her first release since 2014. We also have upcoming dates from folk pop sensation C Duncan and Swedish songwriter Jens Lekman returns to play in the UK. And don’t miss out on hearing the beautiful baritone of Sheffield singer Richard Hawley.

Indie outfit Daughter have already enjoyed a successful year so far after their second album Not To Disappear broke the Top 20 upon its release in January. The new material should feature prominently at their upcoming October shows. Noise merchants Jesus And Mary Chain will be playing a number of dates following their appearance at The 1234 Festival and we have tickets for those who want to see metal band Therapy? go acoustic.

We’ve only got a few tickets left for The Enemy. The Coventry power trio will commence their final farewell tour in September so this will be your last ever chance to see them. Tickets for The Coral will soon come on sale as they promote new album Distance Inbetween with live performances in December.

Having only recently thrilled festival goers by treating them to the likes of Dizzee Rascal, Rizzle Kicks and De La Soul, Penn Festival are already gearing up for yet another amazing weekend in July of 2017 by making Super Early Bird tickets available.

Currently they have yet to confirm which acts will be appearing next year. But as the festival has a reputation for booking some of the biggest names around you can be sure it will be an electrifying weekend.

Taking place at Lincolnshire Showground in the first week of September, Summer’s End is a fantastic way to tail end the festival season. Headliners Ocean Colour Scene will be celebrating the 20th Anniversary of their break though album Mosely Shoals which brought the world such definitive nineties tunes as The Riverboat Song and The Day We Caught The Train.

Other special guests include Shed Seven, Dodgy plus more to be announced!

When it comes to Alt Rock there are few bigger names than Lee Ranaldo. The Sonic Youth guitarist has been producing some of the most exciting indispensable experimental music since the early eighties. He is joined by El Rayo for two headline dates in November. Glaswegian lo-fi duo Honeyblood will embark on their tour later in the year and LA garage rock band Allah-Las return to the UK for some stunning dates.

Rock fans are in for a treat as original Sex Pistols bassist Glen Matlock will be touring in November and Steven Battelle plays his first ever solo gig following the split of LostAlone. Fabulous cover act The Ramonas take their tribute to the New York proto-punks on the road. Plus, veteran rocker Ginger Wildheart invites you all to join his third spooktacular Halloween Hootenanny.

We have the return of a great selection of outstanding indie bands including sixties inspired Scousers Space, Wonder Stuff fans are dizzy with excitement for their December dates and Reef will come back brighter for a tour at the end of the year.

Accomplished singer\songwriter Martin Simpson has a fantastic back catalogue spanning five decades and so has plenty to choose from when he headlines at Komedia in Brighton.

And last but not least Berlin minimal tech group Brandt Brauer Frick will be the main event at an unmissable night at London Oslo in October.