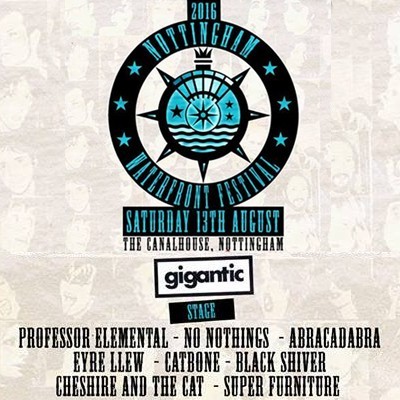 Waterfront Festival has been an essential date on the Nottingham calendar since 2010. Organised by independent promoters I’m Not From London and Audacious Face, the day festival is known for bringing together the very best from Nottingham’s rich musical scene to the scenic Canal House. Festival goers in the past have been treated to everything from hip hop, techno, rock, pop and folk acts.

The festival is a wonderful force for good by raising money for The Wolfson Cystic Fibrosis Centre, John Eastwood Hospice Trust and road safety charity Brake. Waterfront Festival has raised £17,000 in total for various charities since it began.

Now returning for the sixth year, Gigantic is a proud sponsor of the fantastic festival and have our very own stage. We take a closer look at our headline acts, plus a rundown of everyone performing on The Gigantic Stage.

Steampunk hip hop artist Professor Elemental AKA Paul Alborough blends contemporary street beats with a fantasied romantic view of Victorian Britain. Having first started as a single character from a concept album that would span various time periods, Alborough found this explorer character to be overwhelmingly charming and proceeded to flesh him out into an entire act.

A favourite of seminal comic author Warren Ellis (Transmetropolitan, Hellblazer), Professor Elemental is a leading light in Chap Hop and a must see for anyone interested in the eclectic and bizarre.

Speed Garage band No Nothings are the latest signing to festival organisers I’m Not From London. The Hull trio have been touring hard and winning fans all around the UK with their insanely fast, incredibly loud and damn hard set that has been blowing audiences away.

Their eponymously titled EP has just been released on 10” vinyl and MP3. Click HERE to buy No Nothings EP.

"Loud, confrontational and unpredictable.... one thing's for sure, you won't forget them in a hurry." - Drowned In Sound

Evoking the esoteric through their mind bending lyrics and occult aesthetic, the powerful music of Abracadabra has the magic to see them ascent to become the most important acid metal band of all time.

Eyre Llew fast became favourites at Gigantic headquarters. The incredible post rock band have recently emerged as one of Nottingham’s premier acts to be quickly recognised by the excited music press as something truly special.

“They have rendered me absolutely breathless. This is a beautiful band.” - Alex Baker, Kerrang!

"A leftfield extravaganza of the highest quality" - Drowned In Sound