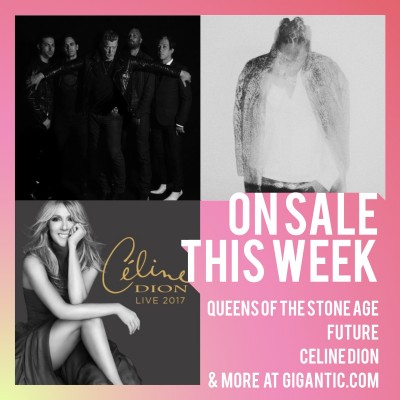 Led by Josh Homme, Queens Of The Stone Age always prove to be wildly original and utterly thrilling. Their unique sound developed out of stoner rock has seen them draw on influences as far and wide as metal, folk and blues to create some of the most exciting music for a generation.

With the news of a new album titled ‘Villains’ produced by none other than Mark Ronson comes the announcement that QOTSA will take over The O2 Arena in London for a very special headline show on Tuesday 21st of November where they will play their new material plus hits from their impeccable back catalogue.

Queens Of The Stone Age tickets are currently available.

One of the greatest rock acts of our age, Radiohead have grown from 90’s angsty guitar band to embrace a wide sphere of influence from kraut, electronica and folk to develop into an unstoppable creative force with each new album release being considered an event in contemporary music.

Following what will be no doubt be a superb performance at Glastonbury, Radiohead will head off to Emirates Old Trafford Cricket Ground in Manchester on Tuesday 4th of July where they will play a headline set expected to draw heavily from their seminal album ‘Ok Computer’ which was released twenty years ago.

Prepare for the most exciting event for millions of years as Dinosaurs Of China arrives at Wollaton Hall in Nottingham. The world exclusive exhibition brings the magnificent monsters of pre-history to life with colossal 3D mounted skeletons including the mighty Mamenchisaurus which towers above three double decker buses. Marvel at the many fossils and specimens on display showing how dinosaurs evolved into the very birds that surround us today.

Running from July until the end of October, Dinosaurs Of China is a wonderful day out for all the family.

Future AKA Nayvadius DeMun Wilburn is the most exciting rapper for a generation. After exploding between 2010 and 2011 with a series of crucial mixtapes, he has grown to enjoy major commercial success starting with his 2012 album debut ‘Pluto’.

In February, he released his awesome sixth album ‘Hndrxx’ which shot straight to No. 1 on the Billboard 200 charts in the US. Later in the year you can catch him performing the new material plus more from his immense back catalogue at Manchester Academy and O2 Academy Birmingham during October.

There can be few bigger names in the music business than Celine Dion. The sensational Canadian singer has just added a date at First Direct Arena in Leeds to a summer tour which also takes her to Manchester, Birmingham and London. Tickets go on sale 10:00 on Thursday.

The beginning of the year saw the release of Deaf Havana’s stunning fourth studio album ‘All These Countless Nights’ which smashed straight into the Top 10. They have just announced a November tour which takes them to a stage near you. Tickets go on sale 10:00 on Friday.

With all the amazing acts going on sale this week, we would advise that you set a personal reminder right now so you can be alerted directly with a text message or an email when they become available through Gigantic.

We always have awesome events going on sale, and this week we have the following:

Jack Up The 80s Vol 5 offers a huge list of great artists from the decade including Jason Donovan, Nik Kershaw and Alexander O’ Neil. They will now be joined by The Cheeky Girls.

Jack Up The 80s Vol 5 tickets are currently available.

Numanoids everywhere will be thrilled with the announcement of a brand-ne headline show for Gary Numan taking place at The Assembly at Leamington Spa on Saturday 29th of July in addition to shows at Rock City in Nottingham and O2 Institute Birmingham during October in support of his forthcoming album ‘Savage’.

We are very excited to hear that our good friends Eyre Llew have announced a launch show for the exciting upcoming debut ‘Atelo’. Catch them when they take over Rescue Rooms in Nottingham on Friday 10th of November where they exhibit their excellent ambient post rock work.

And finally, Gigantic always has a huge range of essential gig tickets to get excited about. Take a look at the best of the rest of what’s going on sale this week: