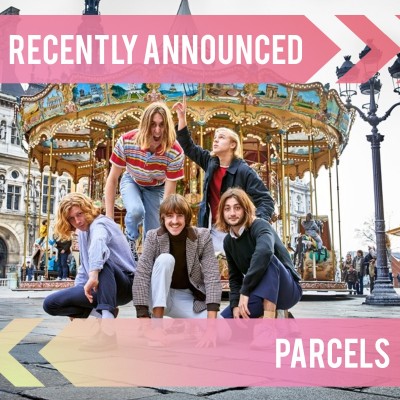 Masters of funk pop Parcels have just dropped their killer new single ‘Overnight’ produced and co-written by none other than Parisian electronica pairing Daft Punk! Bright and upbeat, the song oozes style and continues their run of ultra cool tracks that fuse sophistication with addictive dance rhythms and is the ultimate soundtrack to the dazzling sunny days and hot summer nights of 2017.

Although originally from Byron Bay in Australia, where high school friends Louie Swain (keyboards), Patrick Hetherington (keyboards), Noah Hill (bass), Anatole “Toto” Serret (drums) and Jules Crommelin (guitar) would spend long hours of hard practice in garages and bedroom studios, they have now relocated to Berlin where they draw upon the cities rich electronica scene. Huddled together in a one bedroom apartment far from the sun-kissed beaches they went about perfecting their polished pop sound. And the music press has been quick to pick up their awesome EPs ‘Clockscared’ and ‘Hideout’, impressed with their slick production values and incredible knack for creating impeccable pop.

Speaking of their recent collaboration with superstar DJs Daft Punk, Parcels found the experience to be incredibly inspiring;

"Despite the obvious status that Daft Punk carry there was never any ego in the studio. From the start to the finish it was an equal collaboration with no pressure, only a desire to create something meaningful together. That gave us a lot of confidence in ourselves, as well as respect for those two.”

“It confirmed to us that there are artists in today’s scene who value the simple beauty of creating music based on emotion. Who follow no expectations, no pressures, no structures and who work without egotism. But artists who simultaneously dive into the emotional effect of every single note and who leave no stone unturned in the writing process. To create the right spark nothing is calculated but everything is thought through.”

Now you have the chance to check them out for yourself when they boys come to the UK for an autumn tour which takes them to Sound Control at Manchester, Bristol Thekla, Patterns at Brighton and KOKO in London during November. Parcels gig tickets are expected to go fast, so book yours today!