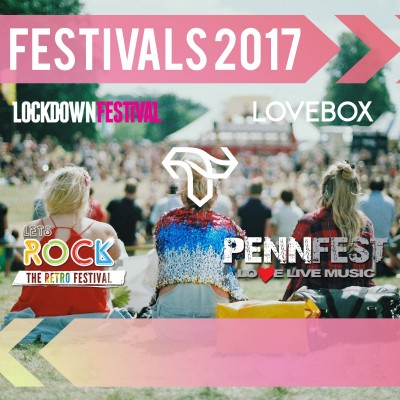 Finally, the hot weather has arrived and what better way to enjoy the British summer time than to hit a music festival? With plenty to choose from, you can enjoy everything from classic rock to 80’s retro fun or massive dance bangers. We even have festivals designed with children specifically in mind meaning there is definitely something for absolutely everyone.

So, grab your tent (and your wellies) as we take a look at the right event for you this summer!

Award winning Sheffield festival Tramlines taps into the cities rich musical heritage and always offers a fierce line-up of major headliners and cutting-edge acts. This year Tramlines boasts the likes of The Libertines, All Saints, Kano, The Big Moon and many more.

Taking place at The Big Park at Buckinghamshire, Penn Festival is the South East’s massive weekender that you need to attend. The huge names taking part include Primal Scream, The Charlatans, Sigma plus more.

Returning to London for a second year, Afropunk is a vital celebration of diversity exhibiting a wide range of exciting cultural spectacles and promises a thrilling and eclectic line-up. Get involved and join the big party in the capital.

Splendour In Nottingham is a wonderful celebration of music for the people of the city, the surrounding area and further afield which sees the likes of Kaiser Chiefs, Busted and Billy Ocean all grace the stage.

With such heavy hitters as Foals, Bonobo, Wild Beasts and Laura Marling, Citadel promises to be the ultimate summer Sunday when it takes place on the 16th of July at Victoria Park in London. Make sure you are there!

A Mecca for the weird and wonderful, Indietracks always plays home to the most original and offbeat acts and this year the Midland Railway Centre at Ripley will feature The Wedding Present, Cate Le Bon plus many more.

Rock and Bike Festival offers great music from Dr. Feelgood, Girlschool and The Quireboys plus a customer and classic bike & trike show plus tattoo competitions all coming together for one unmissable weekend.

Pop fans need to get themselves to Virgin V Festival. Running consecutively at both Weeston Park in Staffordshire and Hylands Park in Chelmsford, the headliners for 2017 are none other than Pink and Jay Z!

Reading and Leeds Festivals are the biggest weekend of the year for anyone with a taste for rock. This year sees the two festivals led by Kasabian, Eminem and Muse at the head of a huge amount of world class acts.

Stand Up In The Wyldes brings five stages of the most hilarious comics to Cornwall for three days of funny. Not only will you enjoy major names Bill Bailey, Katherine Ryan, Russell Kane and Alan Davies but there are also a huge range of rising stars too.

Fun for all the family, Gloworm Festival is a magical weekend full of fantastic activities especially for your little people. Look forward to guest appearances from The Chuckle Brothers, Andy Day and Postman Pat plus music from S Club Party and The Cuban Brothers.

Get yourself to Powderham Castle in Exeter for crazy weekend Lockdown Festival where you can get down with such huge house, grime and drum & bass stars as Wiley, Giggs and Dizzee Rascal. Check out the payment plan allowing you to pay for the festival in monthly instalments.

Having only held the event for the first time, The Downs is one of the newest and most exciting music events to arrive in Bristol. The city is famed for being a cultural hub, and now Bristolians can look forward to seeing Elbow, Seasick Steve and De La Soul.

Get ready to return to the decadent decade of the 80’s for Let’s Rock: The Retro Festival. Gathering together some of the best new wave, pop and new romantic artists from the time into one huge exciting show. The traveling festival will take place at Exeter, Southampton and London

Taking place at Hyde Park across June and July, Barclaycard presents British Summer Time is a fantastic run of some of the biggest names in rock and pop in the world. Tickets are going fast for Phil Collins, Green Day, Justin Bieber, Kings Of Leon, The Killers and Tom Petty & The Heartbreakers so book yours before they all go.

Kew The Music brings together a whole host of massive names for some truly memorable events to take place at Kew Gardens in London throughout July. Passenger, Razorlight, All Saints, Hacienda Classical, James and Mary J. Blige make up the many huge headliners taking part.

Summer Series at Somerset House with American Express are a number of essential culture events where you can see performances from Damien JR. Gong Marely, The Cinematic Orchestra, Warpaint, The Robert Glasper Experiment, Foster The People, Tom Misch, Mashrou’ Leila and Songhoy Blues.

Hockley Hustle unites the most exciting venues of the vibrant area of Nottingham into one exciting day festival. Offering the very best of the cities bourgeoning musical talent, Hockley Hustle raises money for charity and is widely regarded as the best local music event of the year.

Ranging from the traditional to the contemporary, Allen Valleys Folk Festival embraces the many aspects of that make up the modern face of folk. Not only will there be performances to enjoy but also workshops where revellers are encouraged to join in and learn something new.