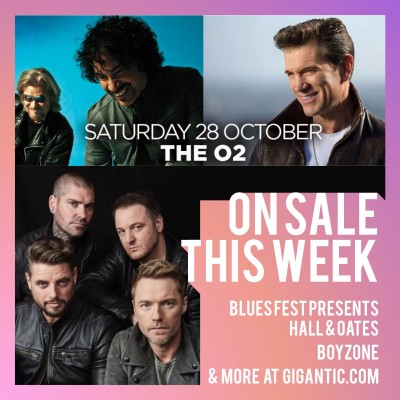 It has now been revealed that the headliners for Bluesfest 2017 will be the massive rock and soul pairing Daryl Hall & John Oates. Having sold 40 million records worldwide with hits such as Maneater, Rich Girl and Out Of Touch making them one of the best-selling music duos of all time.

They join Steely Dan who also make a headline perform the following night on the massive stage at The O2 Arena in London during the last weekend of October. Set a personal reminder right now, because the tickets are expected to sell incredibly quickly.

Just confirmed - ultimate boy band Boyzone are back! Next year sees the lads celebrate their 25th anniversary and though they may be being tight lipped now, we are told we can expect exciting things in 2018.

In the lead up, this summer sees Keith Duffy, Michael Graham, Ronan Keating and Shane Lynch embark on a short tour to Hastings, Windsor and Derby. Do not miss out on your chance to relive the glory days as they move forward into the future.

Taking place at the idyllic grounds of Nottingham Castle, Robin Hood Beer And Cider Festival is an annual event held by CAMRA which has become massively popular with local residents and visitors from further afield.

Look forward to sampling from over 1,000 different real ales plus a further 200 real ciders. You will also be treated to live music and entertainment all contributing to the wonderful experience from Wednesday 11th until Saturday 14th of October. Catch all your Disney favourites from the three hit shows The Next Step, Backstage and The Lodge when The Big Ticket comes to the UK for the very first time.

Hosted by The Next Step‘s Trevor Tordjman and Jordan Clark, you can expect to see many of the stars performing the huge numbers made famous through the shows including Resurrection by Taveeta and Believe That by the cast of The Lodge.

October sees Banks return to the UK for headline dates at Birmingham, Manchester and London. The Orange County based artist released second album The Altar last year which stunned music critics and cemented her reputation for pioneering the sound of contemporary R&B.

Father John Misty (aka Joshua Tillman) has just announced a must see show at Cardiff University Great Hall. It follows the release of Top 10 hit album Pure Comedy which continues his meteoric rise into superstardom.

Be sure to set a personal reminder with Gigantic so you can be alerted with a text message or email whenever your essential gig tickets become available. Other events going on sale this week include:

Roots and acoustic festival Gate To Southwell offers a wide range of innovative and exciting artists as well as many various workshops, market stalls plus food and beer traders to sample.

Taking place at New Cross Inn in London during June and County Showground in Newark during July, UK Tech Fest offers some of the world’s greatest Tech-Metal bands.

Grammy Award winning R&B song writer John Legend fifth studio album Darkness And Light was streamed a staggering 12.5 million times in the first week of release alone. Now he heads to the UK to tour giving you the opportunity to hear the fantastic new material plus other hits live. He is join by acoustic folk artist Jack Savoretti playing support.

Scottish singer Emeli Sande prepares to go out on the road for Long Live The Angels Tour to promote her smash hit second record. Described by The Telegraph as “something special, the sound of a gifted, grown-up singer-songwriter using all the tools at her disposal to put her own heart back together.”

And finally, everyone knows Gigantic is the best place to enjoy excellent customer service whenever booking your essential gig tickets. Other events you need to know are: