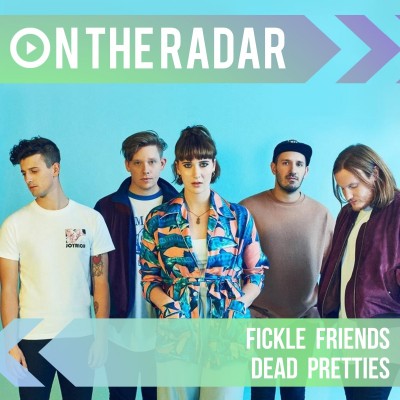 New wave has found a fresh energy in the form of Brighton band Fickle Friends. With a clear eighties influence but definitely with their finger on the pulse of today, Sam Morris (drums), Natassja Shiner (vocals), Jack Wilson (keys), Chris Hall (guitar) and Harry Herrington (bass) are proving to be a massive hit with audiences everywhere.

Having now signed to major label Polydor Records and currently recording their debut album with Mike Crossey (The 1975, Wolf Alice) under the sunkissed skies of LA things are definitely going their way, but it wasn’t so long ago that things were very different.

The first two years of forming saw the band throw themselves headlong into a gruelling life of relentless touring. With no label, publisher of manager they still managed to play at a staggering 53 festivals around the world becoming deeply enmeshed in the many scenes they discovered proving the power of their bright indie pop.

Following the release of their critically acclaimed debut single Swim which went viral having been streamed over 500,000 after a favourable review in Pitchfork, the band turned their attention to a bigger project and set about recording the EP Velvet. Exhausted and close to bankruptcy, the sessions could have easily burnt the band out but proved to be the final necessary push that saw them win that all essential contract.

They make prominent appearances at Leeds / Reading Festival 2017 in August before heading out on their own headline tour in the autumn. Be sure to catch them at Bristol, Sheffield Birmingham and Nottingham during October.

North London flatmates Deb Firth (drums), Oscar Browne (bass) and Jacob Slater (guitar/vocals) are the sound of beautiful chaos with flashes of rage. Taking the energy of punk and liberally applying a great deal of fuzz pedal, their music is bursting out of the capital to be discovered all over the country. They are Dead Pretties.

The teenage three-piece offer that precious feeling so essential for success as a band; the sense of being in the gang. So, it is almost ironic that their latest single Social Experiment takes a good hard swipe at peer conformity within youth culture:

“It seems people of a similar age to us are so focused on becoming what others want them to be, they distort their own identity in order to be accepted into the herd; the pack. We are a generation of sheep. It’s fucking sad.”

Scuzzy riffs are accompanied by images of uniformed behaviour, mob mentality and pack culture juxtaposed with flashes of the band leading the way for rock and roll rebellion. Dripping with cynicism and contempt for those unwilling and unable to break free, the song is a rallying cry for anyone eager to get rowdy on their own terms.

Catch them at The Cookie in Leicester on Thursday 5th of October.