Royal Blood // Stand Up In The Wyldes // Sundara Karma 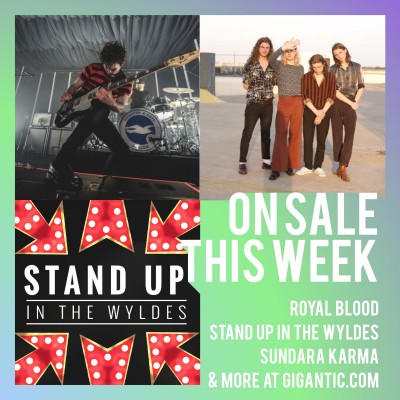 Brighton hard rock two-piece Royal Blood blasted onto the scene with their eponymously titled debut in 2014 which saw Ben Thatcher and Mike Kerr top the charts and win Best Live Band, Best New Band, Best British Group and Best British Newcomer at the 2015 NME Brat Awards. Now they make they return with the release of second album How Did We Get So Dark?

They have just announced a huge headline date taking place at Alexandra Palace in London on Monday 20th of November to promote the exciting new material. Tickets are released on Friday morning so set your personal reminder right now.

Stand Up In The Wyldes is North Cornwall’s best kept secret. Three days of hilarious comics doing their routines across five stages where you can see cutting edge comics, rising stars and such huge headliners as Bill Bailey, Katherine Ryan and Russell Kane.

The Wylde weekend also offers a great selection of local street food and well stocked bars, plus great entertainment. The secret is out so book your ticket before they are all snapped up!

Shrewsbury Folk Festival is a celebration of folk music and ceilidh culture bringing together a great selection of performers. Plus, it also offers a craft fair, a dance tent and events planned especially for youths and children meaning there is something for all the family.

The fantastic festival takes place at the West Midlands Showground from Friday 25th until Monday 28th of August. So, book your ticket today and look forward to a wonderful weekend and enjoy some of the world’s leading folk acts.

You are hereby invited to embark on the journey of a lifetime when Disney On Ice presents Passport To Adventure where you will be joined by all your favourites such as Mickey Mouse, Minnie Mouse, Donald, Goofy and Daisy.

Bluesfest returns to The O2 to present some of the world’s leading lights in rock, blues, soul, and jazz. Just announced; superb southern rock band Gov't Mule will be playing tracks from new album Revolution Come… Revolution Go plus further material. They will be joined by the Kenny Wayne Shepherd Band. Bluesfest: Gov't Mule & Kenny Wayne Shepherd Band tickets go on sale at 10:00 on Friday.

Sundara Karma are one of the most exciting British bands to come along in a generation. This year saw the release of their debut album Youth Is Only Ever Fun In Retrospect which will now be promoted by an autumn tour. Sundara Karma tickets go on sale at 10:00 on Friday.

With demand sky high, we advise that you set a personal reminder with Gigantic so you can be ahead by being alerted with a text message or email whenever the most exciting gig tickets become available.

Other events going on sale this week include:

AfroPunk returns to London for a second year of great music and raising awareness. It has ust been unveiled that Don Letts, The Internet, Kiah Victoria and Thundercat will all be taking part.

Kate Tempest is the latest addition to the jam-packed line-up for OnBlackheath which also includes Travis, The Libertines, Metronomy plus more.

A big weekend of hard rock, awesome tattoos and the best motorbike action. Get yourself to Rock and Bike Festival 2017 at Carnfield Hall in July.

Living legend NAS has been dropping some pretty big hints that the long wait for his new album may nearly be over. The hip hop icon has already sold a staggering 20 million records worldwide and is getting ready to hit the UK this summer when he plays at Liverpool, Glasgow and Leeds before appearing at Wireless 2017 in London.

With the release of their fourth album In Mind, New Jersey’s finest dream pop band Real Estate have announced a handful of dates to promote the new material. Catch them at London, Cambridge and Manchester this summer!

And finally, Gigantic is always the best place to book your essential gig tickets. Other amazing events on sale now include: