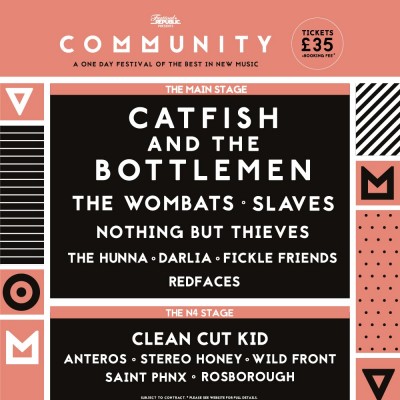 Community Festival is a one day celebration of the very best in new music, bringing together a huge roster of awesome acts that combines big names with hotly tipped performers expected to make great waves in the years ahead.

Taking place at the famous Finsbury Park in London on 1st of July, you can look forward to an incredible day and night with the likes of Catfish and the Bottlemen, The Wombats, Slaves and Nothing But Thieves all being confirmed to play.

We have just had word from the event organisers of a huge list of hot new acts just added to the bill with the addition of the brand new N4 Stage. Get excited to see the likes of Clean Cut Kid, Anteros, Stereo Honey, Wild Front and many more making it a jam packed all dayer you won’t want to miss. Take a look below to discover more about many of the acts playing.

So, book your ticket today and you too can become a valuable member of the Community!

Last year saw the release of The Hunna’s debut album ‘100’ which immediately broke the Top 20. This major success came quickly for the Hertfordshire college buddies who only formed the band in 2015 and have already won over a substantial loyal fanbase.

Darlia are exactly the rock band you need in your life. Taking on aspects of blues and indie and injecting a hell of a lot of swagger, the Blackpool boys have released a string of scorching singles including their latest ‘Ballad of Black & White’ which sets them up for an incredible year.

Brighton band Fickle Friends upped sticks and relocated to the sunny skies of LA for the recording of new track ‘Hello Hello’. The result is a bright synth pop smasher which has clearly been soaked in the blistering heat and is perhaps their best in a long list of strong singles.

Having just signed to Sony, RedFaces are Sheffield’s latest bid for world domination. Given the Steel Cities history for producing some of the biggest names in indie, we might just have another winner on our hands. Diving headlong into the rock and roll lifestyle, these guys look very promising.

Indie pop band Clean Cut Kid are fronted by spouses by Mike and Evelyn Hall. As a teen Mike had learnt to play classic tracks by The Beatles and Michael Jackson on a beat up acoustic guitar with only three strings. Now backed by a full band, he takes that honest and upbeat sound to a whole new level.

Aptly taking their name from the Greek god who would take vengeance on those that would spurn requests from lovers, Anteros are the darkly bitter dream pop band stealing listener’s hearts. The London based four-piece have already played Glastonbury and look set to explode this summer.

Glaswegian rock pairing Saint PHNX take on a wide sphere of influences, drawing on everything from upbeat energetic indie to the craziness of stoner rock and even the percussive experimentation of hip hop. Their debut video 'Reload' racked up 30,000 views in the first 24 hours alone!

Powerfully emotive Northern Irish songwriter Rosborough is attracting widespread attention for the maturity of his work and his deft playing of the guitar. The Derry singer has proved a popular choice for many other festivals as he continues to rise.