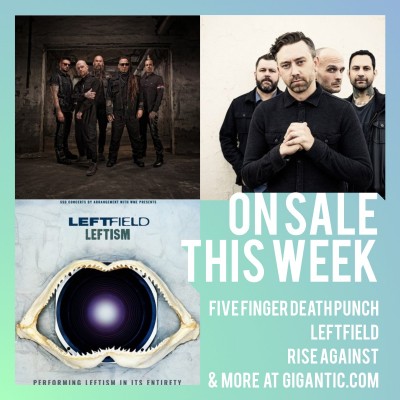 One of the most successful metal bands to explode in recent years, Five Finger Death Punch formed in 2005 and have quickly come to enjoy global adoration. With each album reaching Gold certification and second album War Is The Answer hitting Platinum, their huge commercial success is clear.

The LA hard rockers have just announced an arena tour which is sure to please their UK fans. Playing at Birmingham, Glasgow, Leeds and London, the tickets are expected to sell quickly so set a personal reminder with Gigantic so you are ahead of the rest.

Gloworm Festival is a brilliant two-day event with every element designed with your little people first in mind. The family friendly festival first started last year and was already nominated in four categories of the UK Festival Awards including Best Family Festival and Best Toilets.

Combining great music with excellent entertainment, you can look forward to performances from S Club Party and The Cuban Brothers plus guest appearences from Postman Pat, The Chuckle Brothers and Andy Day who are ready to meet and greet everyone.

Leftfield have led the way for British dance music since their inception at the tail end of the eighties. Their career has charted the rise of techno and house from underground illegal raves to huge mainstream success which came with the release of debut album Leftism in 1995.

Celebrating twenty-two years of their seminal album Leftism, Leftfield will play the record in its entirety at Times Square in Newcastle on Friday 28th of July, 2017. It promises to be an incredible evening of music and one of the biggest events of the year.

Leftfield can be yours from 09:00 on Friday.

With sales of over four million copies of their last five releases since 2011, Rise Against have risen to become one of the world’s biggest hardcore punk bands. First formed in 1999, their political driven agitational music inspires many around the globe.

With the release of their brand-new album Wolves, Rise Against now hit the UK for a mighty autumn tour which takes them to Birmingham, Manchester, Leeds, London and Newcastle where they will play the new tracks plus material from their killer back catalogue.

Rise Against tickets are released 10:00 on Friday.

Just added to his Road To Wireless tour, Travis Scott will now also headline O2 Academy Brixton in London during July to promote the brand-new record AstroWorld, expected to be one of the biggest album releases of the year. The tickets are released today at 10:00.

Hip hop supergroup Run The Jewels is fronted by rapper Killer Mike and rapper/producer El-P. The pair have just announced plans to take over Victoria Warehouse in Manchester in November with tickets going on sale on Friday at 10:00.

Because of the huge interest in both of these events we expect the tickets to sell out very quickly. So, put yourself ahead of the rest by setting a personal reminder with Gigantic so you can be alerted with a text message or an email when they come on sale.

We have a vast range of essential events going on sale this week. Also check out:

Join Community Festival for a day jam packed full of such great artists as Catfish And The Bottlemen, The Wombats, Slaves and Clean Cut Kid.

Are you ready for Lockdown Festival? Offering the very best in drum and bass, house and grime with headline performances form Wiley and Dizzee Rascal.

Get yourself to Penn Festival for the big weekend that boasts the likes of Primal Scream, Sigma. Wilkinson, The Charlatans and many more great bands and DJs.

Get ready for a big weekend in the Wilderness. The impressive list of names playing include Two Door Cinema Club, Grace Jones, Bonobo plus more.

Bringing together demonstrations from celebrity chefs with many stalls each offering something interesting to sample, Great Food and Drink Festival has it all.

The world-famous Harlem Globetrotters have just announced a huge UK tour in May of 2018 where you can see the amazing athletes perform all their breath-taking tricks.

Madness spread the love by headlining House Of Common where they will be joined by De La Soul, Soul II Soul and David Rodigan plus many more.

It wasn’t so long ago that We Spoke To Olly Murs about his exciting Summer Tour 2017. Now he is heading to interesting new places to perform tracks from his latest awesome album 24hrs plus all the hits from his jam packed back catalogue. Make sure you see Olly Murs when he hits a stage near you!

Alt-Pop pairing Oh Wonder are just about to drop their highly anticipated second album Ultralife. They promote the new material with must see dates in Manchester, Birmingham and Bristol in Autumn. With tickets going fast, we advise you to book before they are all gone!

And finally, other great events we now you will love that are one sale right now are: