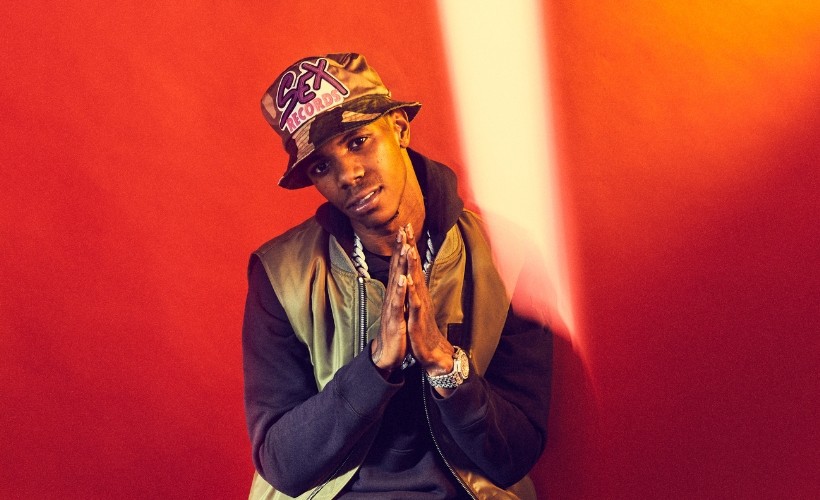 Nonchalant flows, memorable hooks, trap beats that make plenty of room for melody, and the occasional hint of R&B smoothness all combine into an effortless style for Bronx rapper A Boogie wit da Hoodie. The rapper hit the scene in 2016, releasing his debut mixtape Artist on his own label, but later signing with Atlantic. He scored big with the triple-platinum single "Drowning" in 2017, which led to the Top Ten hit The Bigger Artist and its chart-topping 2018 follow-up, Hoodie SZN. Boogie continued his commercial hot streak with projects like 2020's Artist 2.0 and 2021 EP B4 AVA.

As fans awaited the release of fourth studio album A Boogie vs Artist, the rapper released EP B4 AVA in December of 2021. The seven-song project reached as high as number 26 on the charts and included an appearance from Lil Durk on the song "24 Hours."


Where can I see A Boogie Wit Da Hoodie play live?

Get A Boogie Wit Da Hoodie concert tickets with Gigantic!

I want A Boogie Wit Da Hoodie tickets. Where can I get them?

A Boogie Wit Da Hoodie gig tickets are released at 10:00 on Friday 18th of November. Expected to sell out fast - make sure you are ready for launch when you set an event reminder with Gigantic.

The Bronx-bred rapper Artist Dubose, better known as A Boogie Wit Da Hoodie, first hit the rap scene with the breakout hit “Still Think About You” which was featured on his 2016 debut mixtape, ARTIST. The mixtape also introduced fans to “My Shit” which went on to become RIAA certified platinum and was also listed as one of “The Best Songs of 2016” on Apple Music. A Boogie quickly proved himself to be one of the game’s newest heavyweights after XXL dubbed him as “one of the hottest and newest up-and-comers in hip-hop” and included him in the 2017 Freshman Class.

The young star also went on to release the 3x platinum “Drowning feat Kodak Black” along with the platinum certified singles “Jungle” and “Timeless.” During the fall of 2017, A Boogie went on to release his highly anticipated, now gold certified, debut album, THE BIGGER ARTIST, which quickly sprung into the Top 5 on Billboard’s Top 200. He also became the top emerging acting in the U.S. as he simultaneously sprung to #1 on Billboard’s Emerging Artists chart. It is easy to see why The New York Times named A Boogie “the most promising young rapper the city has produced in some time.” With a 2018 BET Award Nomination for “Best New Artist” and the release of his sophomore album, HOODIE SZN which made its debut at #2 before becoming the #1 album on the Billboard Top 200 and was top 10 for 16 consecutive weeks. His hit track "Look Back At It" is certified platinum in the US and Canada. Continuing the momentum, his singles "Demons & Angels" and "Startender feat. Offset & Tyga" are now gold-certified. A Boogie will continue to make waves and redefine the sound of New York rap.

Organisers have only made limited supplies of A Boogie Wit Da Hoodie concert tickets available so do not hang around and book yours before they go. Gigantic always has a huge range of essential gig tickets on offer. So, come and take advantage of our many years of experience giving excellent customer service whenever you are planning your big night out.

Get tickets for A Boogie Wit Da Hoodie with Gigantic

Everything was amazing just wish he went more to the right spent most of the time on the left, but was amazing 😉 I loved it so much and so did my family😜

That's all we have for A Boogie Wit Da Hoodie! Check out their upcoming shows