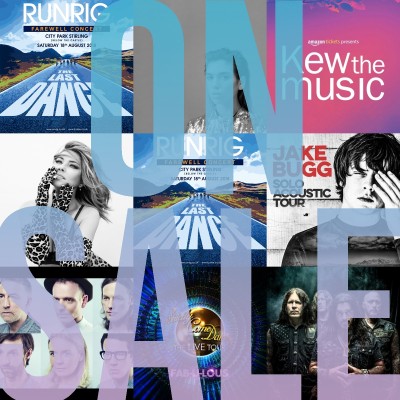 First formed in 1973, Runrig have risen from a three-piece playing wedding receptions to become the international sensation loved by loyal fans around the world. Taking their foundations from Celtic folk and building it into massive anthemic rock, they have released fourteen albums and packed out venues whenever they play.

But all good things must come to an end, and now the Scottish legends are calling time with a farewell concert. Taking place at City Park Stirling on Saturday 18th of August 2018, the beautiful grounds make a fitting setting for the bands grand finale.

Runrig tickets are released at 10:00 on Friday.

Having sold 100 million, Shania Twain is one of the world’s biggest country stars and amongst the best-selling songwriters of all time. In addition to her commercial success, Twain has taken home a total of five Grammy Awards and is known as the ‘Queen Of Country Pop’.

This year has seen the release of her first new album for fifteen years. Aptly titled ‘Now’, the record includes the songs ‘Life’s About To Get Good’ and ‘Swingin’ With My Eyes Closed’. See her when she arrives in the UK to play two stunning shows showcasing the new material at Manchester Arena and Arena Birmingham during September 2018.

Shania Twain tickets are released at 10:00 on Friday.

Last year saw the release of his latest record ‘Migration’ which broke the UK Top 5 in the charts. He now promotes with a huge show at Alexandra Palace in London on Friday 1st of June.

Bonobo tickets are released at 09:00 on Friday.

Smash hit BBC 1 TV series Strictly Come Dancing offers you the chance to see all the thrills of the ice when they bring their live show to an arena near you. Combining dazzling technique, spectacular sequined costumes and high drama, you can expect an amazing show.

The live shows kick off in January of 2018 and continue through till February as the tour takes the skaters to Birmingham, Newcastle, Leeds, Manchester, Glasgow, Sheffield and London.

Kew The Music annually presents some of the best loved acts at the Kew Royal Botanic Gardens. The family friendly concert make the best of the British summertime and offer a unique outdoor experience in an iconic setting.

This year they offer you the chance to see The Gypsy Kings, The Human League and Jools Holland & his Rhythm & Blues Orchestra make headline performances during July 2018.

Kew The Music tickets are released at 10:00 on Friday.

Dark pop phenomenon Dua Lipa released her critically acclaimed eponymously titled debut album in June. Having impressed with her festival performances and selling out her upcoming shows for the year, she now announces new shows for April 2018. Dua Lipa tickets are released at 09:00 on Friday.

Love From Stourbridge 2018 national tour line up will include incredible indie bands The Wonder Stuff and Ned’s Atomic Dustbin plus a DJ set from Graham Crabb of Pop Will Eat Itself. Get involved when it hits a stage near you. Love From Stourbridge tickets are released at 09:00 on Friday.

As you would expect, the demand for Dua Lipa and Love From Stourbridge tickets is massively high. You can set yourself ahead of the rest for these two events plus all tickets about to be released by setting a personal reminder to alert you with a text message or an email once they become available.

Gigantic always has the very best gig tickets on offer, with more being added to our stocks every day. Check out all these excellent events you can select from going on sale this week:

Day festival 2Q takes over the many mighty venues of Leicester for the first time with a line up which includes Circa Waves, Peace, British Sea Power and more.

Last chance to book Leopallooza tickets before they rise in price. The Cornish festival promises three days of fantastic music hosted in the idyllic field.

Pop punk heroes Bowling for Soup became internationally famous in the early 2000’s, spurred on by the huge success of their hit single ‘Girl All The Bad Guys Want’. Having to continued to pack out venues throughout their career, they will now return to the UK for an extensive tour in February of 2018.

Jessie Ware has become a major name since the release of her debut album ‘Devotion’ just five short years ago. The London based song writer fuses R&B and electronica to create a unique form of pop exciting a generation. Catch her when she heads out on tour in March of 2018.

Gigantic is the perfect place to select from a vast range of essential gig tickets whilst also benefitting from our excellent customer service. Take a look at all these hot tickets we currently have on offer for you: