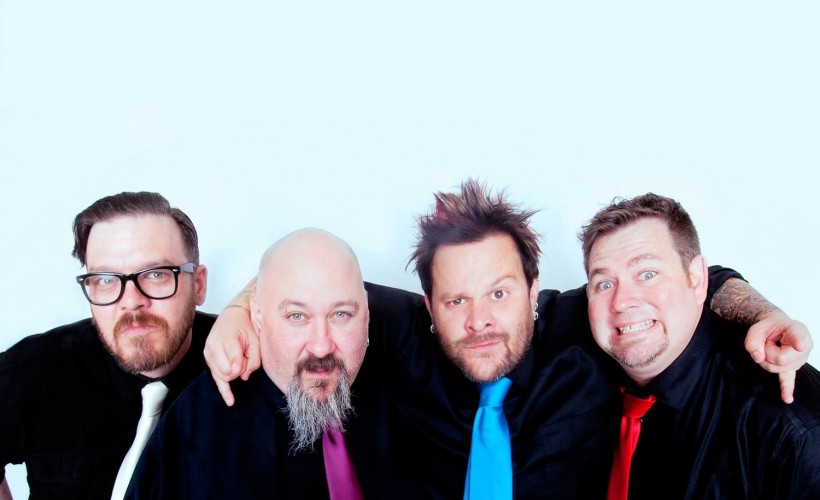 About Bowling For Soup

Cheeky, quirky, and to be honest, incredibly difficult to categorise into any particular genre, Bowling for Soup are one of those musical enigmas that you either absolutely adore or have yet to experience. Inevitably, exposure to their up-beat, punk-influenced sound garners a positive response, and after 23 years they’re still as busy as ever.

Fortunately, at Gigantic we’ve got Bowling for Soup concert tickets currently available for their upcoming gigs, starting with O2 Academy Bristol followed by Reading Hexagon and then O2 Guildhall Southampton in November. They then progress on to De La War Pavilion at Bexhill On Sea, O2 Academy Leicester and O2 Academy Leeds during December 2018.

Hailing from Wichita Falls, Texas, Bowling for Soup first bounced onto a stage in 1994 and haven’t stopped since. A relentless round of tours (including a somewhat premature UK farewell tour in 2013) have built up a solid fanbase for these high school friends. Influences include everything from Mötley Crüe and the Ramones to Green Day. In 1998 they released their first full-length album ‘Rock on Honorable Ones!!!’, and haven’t look back since. A succession of releases cumulated in 2013 with the ‘Lunch. Drunk. Love’, which while it may not have been one of the critic’s favourites, was certainly popular with the fans.

A mish-mash of styles that include punk revival, pop and alternative belies the band’s actual musical skill, which is considerable. On stage they’re energetic and enjoy interacting with their audience, and yes, there is very often a traditional ‘mosh pit’ at the front, so if you’re of a nervous disposition you may want to avoid the front centre section! But Bowling for Soup tickets are immensely popular with those in the know, so if you haven’t experienced them before, it’s well worth grabbing a couple from Gigantic to find out what all the fuss is about. Just in case this latest tour really is a farewell tour…until the next one!

Get your hands on tickets for Bowling For Soup

Brilliant performance as usual from BFS just never get bored of this band superb. Support act not ur girlfriendz a great performance for their age and Patent Pending was their usual energetic brilliant selves. All in all a great night

Really great night, they are a little older and a bit heavier, but they have definitely still got it! Not seen it before but I liked the fact that the supports got to join in. They look like they are having a blast together. Not Ur Girlfrenz were ok given their age, Patent Pending were very very good and Bowling for Soup were fantastic. Nice blend of classic hits and Christmas songs.

That's all we have for Bowling For Soup! Check out their upcoming shows