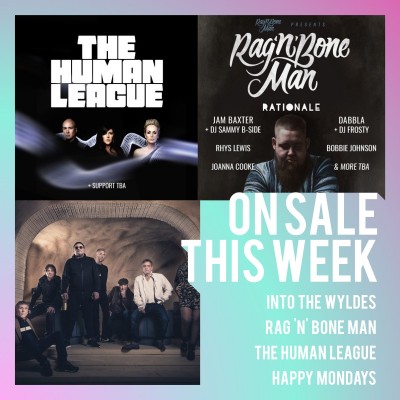 Live In The Wyldes takes place at the idyllic custom made site set in a scenic valley in North Cornwall, famed for being the home of some of the very best beaches of the British Isles. The three-night festival will play host to some incredible acts.

So far, they have announced that the festival will feature double BRIT Award winning blues singer Rag’n’Bone Man plus synthpop legends The Human League who were described by David Bowie as "the sound of the future", with a further headliner for Saturday yet to be announced.

Click HERE for your Live In The Wyldes tickets.

No-one parties harder than Happy Mondays, and with the 30th anniversary of their debut album comes the announcement of their Twenty Four Hour Party People - Greatest Hits Tour! You can bet there will be plenty of thrills leaving you grinning from ear to ear.

Credited with pioneering the Madchester sound, they were among the first to bridge the gap between rock and rave tapping into fuck and psychedelica along the way to change the sound of guitar music for decades to come.

Every year Splendour Festival treats the people of Nottingham and the surrounding areas to the very best in pop and rock. Held at the auspicious grounds of Woolaton Park, revellers can admire the scenic Elizabethan country house and parklands whilst enjoying the incredible music.

This year the festival presents such huge names as indie heroes Kaiser Chiefs, ultimate pop punks Busted and new romantic founder Tony Hadley. Now that is what I call a day out!

Swedish electronica band Little Dragon have remained at the cutting edge of music for a decade. With the impending release of the fifth studio album titled Season High they take over Roundhouse in London on Friday 27th of October to showcase their new material. Tickets are released Friday (17/03) so set a personal reminder with Gigantic right now.

Tom Jones enduring sex appeal has seen the Welsh wonder maintain his massive international fame, enjoying a highly decorated 50 year career that includes the sale of 100 million records and receiving a Grammy Award. A Norfolk date has just been added to his tour.

Other awesome events going on sale this week include:

Get yourself down to Bristol Bierkeller and The Lanes on Saturday 29th of July for premium punk day festival Fat Lip Fest which boasts three stages playing the likes of Young Guns, Blood Youth, Feed The Rhino and many more.

We are so excited for 2Q Festival 2017. The Derby day festival has just announced on which stage each act will be playing at from the many venues participating. Tickets are selling fast so book now!

Gathering together a huge range of cultural events, The Bath Festival brings you a huge ten-day celebration of music and literature. The sheer wealth of talent on offer attracts an international audience.

Madness hit the road playing fantastic outdoor concerts at Scarborough, Falkirk and County Durham before taking over Clapham Common for their huge House Of Common. The Clapham Common party sees them joined by De La Soul plus David Rodigan and more for a big summer scorcher.

The Camden Rocks festival has long been one of the biggest and best one dayer music events in the whole of the UK. Uniting twenty North London venues to play a staggering two hundred bands, Camden Rocks often offers the best rising stars and more than a few big surprises.

And finally, you know Gigantic always has the tickets you need. Here is some of the great events you can book with us: