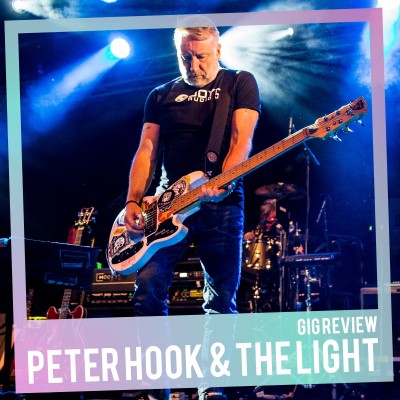 Damn. Its 19:35 and my friend texts to ask where I am. Peter Hook & The Light took to the stage quarter of an hour ago and I’ve already missed Ceremony being unable to get to Rock City any earlier. One of my favourite tracks from the Joy Division / New Order back catalogue, the song serves as a link between the two bands being written before the tragic suicide of Ian Curtis only to become the very first single following his tragic demise, complete with B-side demo when first practised, for the band’s second incarnation. Full of tender pathos, the anguished vocals are tempered by a catchy bass riff, written in typical Hook fashion at the high end that others don’t really bother with marking it as a pop song like no other. And I’ve missed it.

By the time I do arrive they have just launched into Everything’s Gone Green and I run to the bar to get a round in. The arpeggio synths rise and the bass builds and then chimes in sync with the adrenaline that starts rushing through my system. Pint safely in hand I survey the dark throbbing hall and instantly see the generation gap donut effect, those who were there to see this all the first time round form a halo round the edges while the leaping twenty somethings and younger make a sweaty centre enthralled with witnessing the birth of rave being re-enacted before them in the iconic Nottingham venue.

Having been thrown out / left (depending who you ask) New Order, Peter Hook has recruited his very own band The Light whose performance of the synthpop’s best love tunes are damn near perfect. As they hurtle through the hits you could be forgiven for thinking that the dark heart of Rock City complete with its heavy industrial furnishings was actually The Haçienda in its heyday.

Some of the biggest songs come midway through the set. Temptation is followed by Blue Monday, played surprisingly early given the way its lends itself perfectly to the end of a set, and people give themselves entirely over to the music. The levels are perfect, the sound is loud and the execution is flawless as fans raise their hands to Thieves Like Us, Subculture and more.

If I were to make any complaint, and this is only if I were forced mind you, Hook’s vocals are not exactly perfect. Hampered with mic problems (ain’t that always the way?), his tendency to mumble meant that the words are frequently lost in the enormous wonderful energy being transmitted from the stage into ears which electrifies arms and legs into ecstatic dance. And I’m also somewhat disappointed that he is just playing New Order songs and nothing of Joy Division, I resolve to just enjoy it for what it is and look forward to maybe hearing Love Will Tear Us Apart at the end of the set.

They begin to round up the set with a rowdy rendition of Bizarre Love Triangle which inevitable sends many pint glass into the near stratosphere only to land on some poor sod across the dancefloor. What comes up… after all and everybody is on a massive high as they leave the stage after finishing with 1963, roaring in appreciation.

Utterly delighted I turn to my friends to discuss plans for what we are going to do for the rest of the night. Confused, they ask me why I don’t want to stick around for the Joy Division set. I grin. As amazing as that was it is about to get even better.

Nipping downstairs for a quick toilet break I get chatting to two blokes from Manchester (where else?!) and they are quick to tell me how much they are enjoying the night, no matter how crap Hooks vocals are. Enthused with the prospect of hearing some classic dark post-punk I’m no longer quite as concerned with his tendency to mutter and remind them that you can forgive a man who has been in, not one, but two vastly influential pioneering bands. And besides, Bernard Sumner isn’t exactly the best singer in the world and Ian Curtis’ crooning would never have seen him through to the second round of The X Factor and this is the precise point. The vocal delivery of both Joy Division and New Order is distinct because it feels like its being sung by your next door neighbour. It appeals because it comes from the voice of 'one of us' rather than 'one of them'. But now isn’t the time for chat because judging from the cheering the band must be returning to the stage.

The second set starts with No Love Lost. A writhing disco track from their early Warsaw days which they play with the relentless power the song deserves which comes to characterise the sound of the second set. The blistering speed at which they throttle through such blistering numbers as Warsaw, These Days and Transmission cannot fail to thrill, even more when you realise the deft skill on display as it is all played note perfect.

Whereas New Order were characterised by the good times Joy Division are known for the wrought pain and emotion weight of their material which the second set captures. Shadowplay is revealed in all its savage beauty, Leaders Of Men is screamed out appropriately and as the band play Atmosphere the room is filled with a sense of gothic gloom without spilling over into pantomime.

As I guessed, the night was ended with the song that came to define the band despite being orientated far more in pop than any of their other songs which are far more abrasive or overtly experimental; Love Will Tear Us Apart. This live version is changed to amplify audience interaction brought to near silence allowing all the spectators to unite as one and sing the chorus only to be joined by Peter Hook & The Light for one final swell before the finish. Everyone continues to sing their heart out long after the band have gone.

And just before I go I know what you’re thinking and the answer is no. I honestly didn’t see a single Unknown Pleasures T-shirt all night.

Click HERE for your Peter Hook & The Light Tickets.