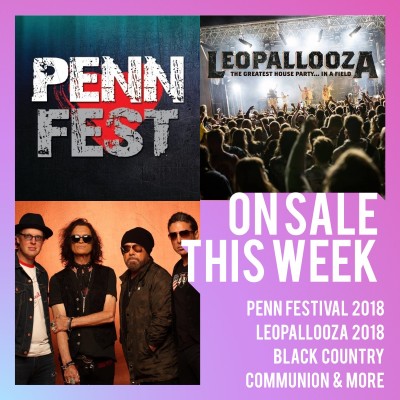 Nestled nearby the picturesque village of Penn in Buckinghamshire, Penn Festival is the three-day family friendly music festival which is fast growing in reputation as absolutely unmissable by those looking for a good time. As well as big tunes from huge named bands and DJs, there are plenty of other activities including a global market place plus a wide selection of food stalls – so get involved!

Early Bird tickets are just about to be released allowing you to take advantage of the discount prices. Plus, Penn Festival also offers a variety of options including VIP areas and Posh loos.

Later in the year sees the launch of brand new record ‘BCC IV’ and with it comes two major UK dates taking place at Wolverhampton Civic Hall and Eventim Apollo in London during January of 2018.

Black Country Communion tickets are released at 09:00 on Friday.

Get yourself to Nottingham Castle from Wednesday 11th until Saturday 14th of October to join in the Robin Hood Beer And Cider Festival, the annual celebration of brews as organised by CAMRA. Last year saw a staggering choice of 1,270 different casks of real ale and cider which is widely believed to be the biggest offering the UK has ever seen – maybe even the world!

Look forward to live entertainment as you sample the many different drinks on offer.

Massachusetts glam metal band Extreme rose to glory in the 80’s and have remained as a major act, having sold a staggering 10 million albums worldwide. Extreme tickets become available at 09:00 on Friday. We recommend you set a personal reminder right now so you can be alerted with a text message or email when they are released.

The serious music fan will be heading to 110 Above where they will be treated to the likes of Black Honey, Sundara Karma, Little Comets and many more.

With Embrace, Lightening Seeds, The Bluetones and Blackgrape all playing Beano On The Sea, you better buy your festival ticket before they all go.

Get to Penyland Farm at Wrexham to enjoy a huge range of premier tribute acts all performing for Rock the Park. A great day out for everybody!

Boyzone are back in town! The incredible Irish boy band rose to fame in the 90’s to become household names and enjoy worldwide fame with such hits as ‘Isn’t It A Wonder’, ‘All That I Need’ and their cover of ‘Words’. They play at Hastings and Windsor during August then Derby in September.

The work of articulate rapper Akala sees him at odds with those that would oppress, taking on the unjust with impeccable lyrical flow. Catch him playing at a stage near you when he tours extensively in Autumn.

You know Gigantic is always the best place to find all the essential gig tickets you need. Check out all these exciting events currently on sale: