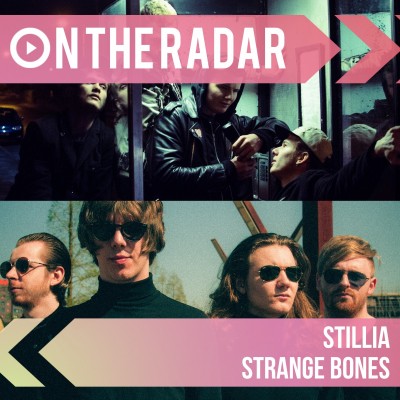 Taking all the passion of rock and roll whilst applying indie pop sensibilities, Stillia look set to be the breakthrough band of the year.

Already the subject of quite some considerable attention, upon being given a sneak peek BBC Radio 2’s Janice Long has described their highly anticipated forthcoming first album ‘From Ground to Light’ as "The best debut she has heard since the LA’s". Look for it in stores and online when released later in the year.

“We’ve only just got on the ride and it’s just starting to get going and we want to see how far we can take it and if we can reach the ambitions we set out to achieve.” - Jack Bennett

Much has been made of their bombastic single ‘Let Me In’ and for good reason. The song is a big belter which begs to be turned up loud driving in the car or on the disco floor. It stars the one and only Johnny Vegas playing the role of the awkward obsessional fan. Something these lads will definitely have to be putting up with these days!

Their second single ‘4am’ continues the themes of forlorn love, capturing a moment in time which is somewhere between passion and folly as Jack sings “I’m stood outside your door and its 4 in the morning, I’m a little bit drunk but I’m trying my best to be charming”.

They wrap up the year with an extensive tour during November and December. What a way to see out the year!

Stillia tickets can be yours right now.

Blackpool boys Strange Bones are brothers Bob and Will Bentham who have teamed up with childhood friend Stuart Newburn to take on the world and everything in it. Tapping into the passion of punk they denounce conformity and obedience, decrying the bland and homogeneous for their fall into commodity fetishism whilst flying the flag for rebellion of the underdog.

“We’ve been playing as a band for just over 10 years I guess, since I was 11. Will and I are brothers and our parents surrounded us with punk rock and all things loud from a very young age. We met Spud on the skatepark when we were little nippers and I suppose years of jamming and just short of 1000 shows has left us with Strange Bones, which we birthed about a year ago.” – Bob Bentham

Playing every show like its their last, the band are absolutely dedicated to making every performance something monumental and are always eager to be back on stage.

“For us it’s always been about the loud fuzzy rumble of playing a live show. We wanna gig gig then gig some more, to play all this new material 10 years of playing together has spawned. The next few years we wanna tour till we drop and release an album and a shit load of singles.” – Bob Bentham

The tearaway trio have just announced an Autumn tour so be sure to catch them at a stage near you!