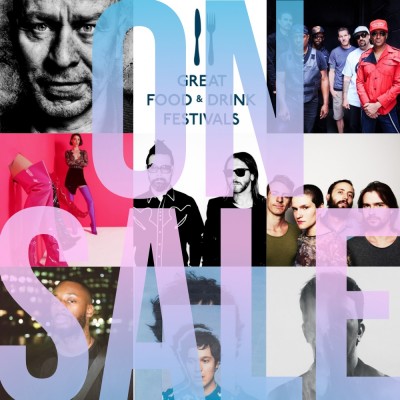 Often cited as being one of the most influential bands to come out of the original wave of post punk bands, The The spanned the gap between artistic ambition and commercial success. Led by songwriter Matt Johnson, they have undergone substantial changes in their roster to include some of the greatest alternative musicians ever. Previous members have included Eric Schermerhorn, Gail Ann Dorsey and even Johnny Marr.

Making their very welcome return, the seminal indie band will play at the prestigious Royal Albert Hall in London on Tuesday 5th of June. Tickets are expected to sell very fast, so set your personal reminder right now!

The The tickets become available at 10:00 on Friday.

For all those eager to discover new gastronomic delights and try new treats, the Great Food & Drink Festival is the perfect place to sample from a wide range of tasty morsels. With experts on hand giving demonstrations, you’ll be a whizz in the kitchen in no time.

This weekend sees the festival head to Lincoln Castle for two days where celebrity chefs John Torode and Michael Caines will be on hand to reveal their trade secrets.

Combining drummer Brad Wilk, guitarist Tom Morello and bassist Timothy Commerford of Rage Against The Machine, DJ Lord and Chuck D of Public Enemy plus B-Real from Cyprus Hill, Prophets Of Rage are less of a supergroup and more an articulate alliance of anger in response those responsible for the accelerated growth of worldwide of inequality and injustice.

Catch them make a rare UK performance when they play O2 Forum in London on Monday 13th of November.

Prophets Of Rage tickets become available at 10:00 on Friday.

Since the release of her debut album ‘Marry Me’ just over a decade ago, St. Vincent has consistently proved to be one of the most inventive, experimental and enigmatic musicians of our time. Defying convention, she draws influence from rock and electronica to produce Grammy Award winning music.

See her perform material from her highly anticipated new album ‘Masseduction’ plus further hits at O2 Academy Brixton in London and O2 Apollo Manchester in October.

Taking the power of grunge and delving into vast emotional depths, Feeder captured the imagination of a generation towards the end of the 90’s. They now revisit their extensive back catalogue with ‘The Best Of Tour’ which sees them perform on stages all around the UK. Feeder will become available at 09:00 on Friday.

Brooklyn band Big Thief are proving to be one of the most exciting indie acts to emerge in recent years. Their second album ‘Capacity’, released through Saddle Creek, delves into the complicated nature of identity. Catch them when they play the UK in November. Big Thief tickets are now available.

Demand for essential gig tickets is always high so we really recommend you set yourself ahead of the rest by setting a personal reminder right now, so you can be alerted with a text message or an email when your chosen tickets become available.

With exciting new events being made available all the time, you should always make regular returns to Gigantic to check out what’s new. Check out all these fantastic events we know you will love:

Nottingham has a well-earned reputation for being a central creative hub with an excellent local music scene. Hockley Hustle is regarded by many as the showpiece for the cities wealth of talent. The one day metropolitan festival takes advantage of the many fantastic independent venues of the bohemian Hockley area, raising money for charity through countless performances from local artists.

Let’s face it; who doesn’t love garage punk, surfer rock & roll and psyche? Blast Off! is a weekend of awesome music taking place across various Nottingham venues from Friday 10th until Sunday 12th of November.

Blast Off! tickets are currently available.

Cult band The Front Bottoms have enjoyed a loyal following ever since they first emerged a decade ago. Now fans and critics alike are eagerly awaiting the release of their latest album ‘Going Grey’, scheduled to come out in October. They then hit the UK for a promotional tour in February of 2018.

Join Seattle based indie popstar Perfume Genius when he takes over Roundhouse in London to perform material from his latest album ‘No Shape’. Released through Matador Records, it was described by The Guardian as “confident and melodic, with a rich seam of strange”.

Gigantic is the perfect place to select from a vast range of essential gig tickets whilst also benefitting from our excellent customer service. Take a look at all these hot tickets we currently have on offer for you: