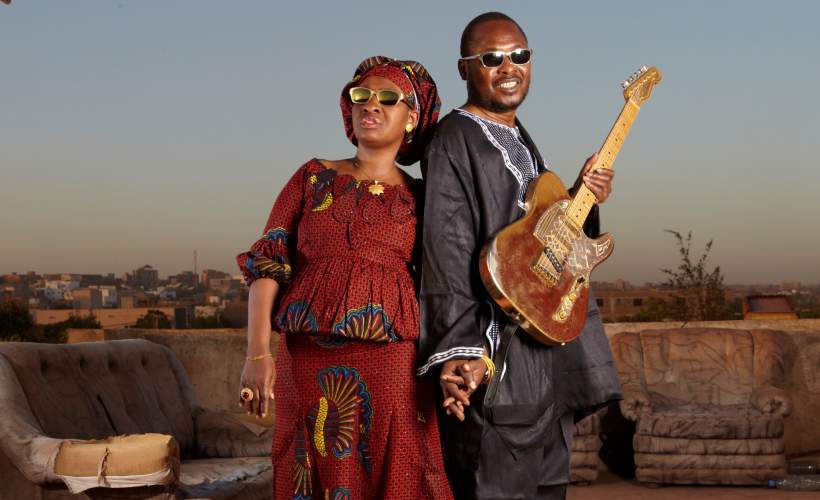 Award winning Malian musicians Amadou & Mariam have been thrilling international audiences throughout an incredible career which spans across five decades. With each time they play heralded as a major music event and every new record exciting both critics and fans, they continue to be on the rise. Their latest record was brought out in 2012 and is entitled Folila.

“For those who have never heard Amadou & Mariam's music, Folila may be a perfect place to start exploring. ” - Paste Magazine

“Mixing up elements of rock, pop, blues, jazz, soul and funk, each song finds its way into a supple groove and just bounces around there as though Amadou's guitar strings and Mariam's vocal chords were made of musical elastic.” - The Telegraph

“With their eclectic cocktail of rock, pop, blues, jazz, soul, funk and traditional African music, these grandparents can still knock out an irresistible groove to match the best, but perhaps they need to be reminded that they should do it alone a little more often.” - musicOMH.com

They have just announced an exciting upcoming headline date sure to thrill all in attendance at KOKO in London on Wednesday 24th of May, 2017.

Amadou & Mariam tickets are just about to come on sale. Set your personal reminder to alert you through a text message or email so you are ready for their release at 10:00 on Friday 27th of January.

Highly decorated, the pair have picked up two BBC Radio 3 Awards For World Music in the Best African and Best Album categories. They were declared Best Group at the inaugural Songlines Music Awards and have even received a nomination at the Grammys.

Given their rare UK appearances and the sheer demand, we expect our limited supplies of Amadou & Mariam concert tickets to shoot off the shelves so you need to book quickly or risk missing out. Offering fantastic customer service on a huge range of essential gig tickets, Gigantic is the place to book your big night out!

That's all we have for Amadou & Mariam! Check out their upcoming shows