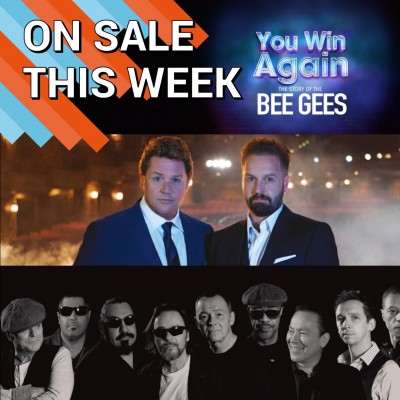 The pair met 10 years ago whilst working on a production of Kismet at the London Coliseum and became lifelong friends.

“It’s been my experience that there is only one thing I enjoy more than working with someone whose talent I admire and who constantly challenges themselves to try new things and keeps getting better, therefore making me work harder and try to be better, and that is to work with someone who makes me laugh, has my back and is a real friend. With Alfie I think I’ve hit the jackpot. This is going to be such a great experience for us and hopefully the audiences….bring it on!!!”. – Michael Ball

Join them in June 2017 when they hit the road for their Together Again tour playing a selection of fantastic venues up and down the land. Tickets go on sale at 10:00 on Friday 16th so set a personal reminder right now!

Click HERE for your Michael Ball and Alfie Boe tickets.

UB40 have enjoyed a glittering career which has seen them chart in the UK with more than 50 singles, be nominated for the Grammy Award in the category of Best Reggae album a staggering four times and sold more than 70 million records.

They continue to be massive crowd pleasers, with such hits as Kingston Town, (I Can't Help) Falling in Love With You and Red, Red Wine, plus many more. They have just announced a huge arena tour for December 2017.

“UB40 are very excited to be returning to some of the biggest venues in the UK during our ‘Cites and Towns’ tour in December 2017. We are also particularly pleased to be playing such a fantastic venue for our hometown gig in Birmingham.” - Robin Campbell

It has just been announced that Canadian rapper Vanilla Ice and hip hop trio Sal-N-Pepa will be the headliners of the inaugural edition of I Love The ’90s Tour. Looking back on a powerful trend-setting decade which saw the rise of R&B, rap and hip hop and revitalised a stagnant music industry with fresh new beats.

More than just a nostalgia trip, each leg of the tour includes upwards of 8 iconic 90’s artists to create an amazing evening at some of the biggest stages the UK has to offer.

The Autumn 2017 tour takes them to London, Glasgow, Liverpool and Birmingham for an immense night out!

Click HERE for your I Love The 90’s Tour tickets.

You Win Again – The Story Of The Bee Gees

You Win Again – The Story Of The Bee Gees follows the story of the Gibbs Brothers and their rise in the 60’s to become disco superstars in the 70’s and beyond as experienced through the eyes of their manager. The production explores the contrast between their glittering onstage personas and the “dark external corruption” many are unaware of.

Embarking on its first ever nationwide tour, the show immerses you in all of the supergroup’s hits and comes to a stage near you.

Click HERE for your You Win Again – The Story Of The Bee Gees tickets.

Masters of Nu-Disco, French electronica duo Gaspard Augé and Xavier de Rosnay are better known as Jus†ice. After setting fire to dancefloors around the world with their incredible remixes, they released Grammy Award nominated album debut † in 2007 followed by second record Audio, Video, Disco in 2011. With the announcement of brand new album Fire, they have just released tickets for two nights at Brixton Academy next year which are sure to sell out fast!

Glaswegian indie icons Belle & Sebastian have grown from mixtape heroes to regularly break the Top 10 with each new album release. Their deceptively twee tracks draw on the fey C86 sound whilst delving into delightfully dark subject matters. Their sublime subversive songs continue to chime with an ever-greater audience and their date at The Royal Hospital Chelsea in London goes on sale Friday.

Ludovico Einaudi has revolutionised classical music by adapting the traditional to include contemporary sounds and modern electronic instrumentation. He has provided the score for films and TV elevated the acting to something ethereal with his extraordinary pieces including his BAFTA nominated work for the programme This Is England ’86. Tickets for his live performance go on sale this week.

Further fantastic acts going on sale this week are:

Metal heads everywhere will be excited for the upcoming UK Tech Fest. The 2017 line up announced so far includes The Black Dahlia Murder and Obscura who are both making their only UK appearance at the festival, plus Aborted, The Arusha Accord, Hacktivist plus many more.

So, book your tickets now because they will all go!

Rock fans have been freaking out ever since Download announced that their festival headliners on the Lemmy Stage would be Armenian agitators System Of A Down, anthemic Kilmarnock rockers Biffy Clyro and awesome living legends Aerosmith.

More to be announced soon so book your ticket today!

Retroactive Festival is the best place to get your 80’s pop hits fix. Taking place at the idyllic Caldicot Festival, the whole family are guaranteed a good time enjoying the likes of The Human League, Tony Hadley, Jason Donovan and more.

Book your ticket to enjoy the 80’s summer fun!

Fusing biker culture with rock and roll, Rock And Bike Festival offers a weekend of tattoo art competitions, a breath-taking motorbike show and some truly great music. The Quireboys, Dr. Feelgood and Oliver Dawson Saxon all join the massive line up.

Tickets are selling fast so book before they are gone!

Click HERE for your Rock And Bike Festival tickets.

Sensational singer Jess Glynne took home the Grammy Award for Best Dance Recording with the Clean Bandit track Rather Be which featured her vocals and introduced her to the world in 2014. Having dominated the charts with her collaborations and solo work she remains as vital as ever and has just announced August 2017 dates.

Cheeky chappy Olly Murs is the latest addition to the Sure Big Gig In The Park to take place in Howard Davis Park on the beautiful channel island Jersey. The big weekender sees him join the likes of Holly Johnson (Frankie Goes To Hollywood), Kim Wilde and more. The news comes after the announcement of his extensive Summer 2017 tour.

With the announcement of new album Damage And Joy, The Jesus And Mary Chain have announced a tour to promote the new material. They hit the road in Spring 2017 when they will play classic songs from their back catalogue in addition to new favourites.

And finally, get your tickets with Gigantic for: