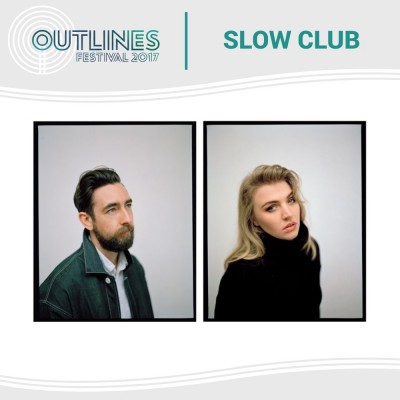 Sheffield based two-piece Slow Club are multi instrumental wonders Charles Watson and Rebecca Taylor. The pair write stunning songs that tap into the tradition of folk brought right up to date, collecting a bit of 60’s pop and 70’s rock along the way.

Signed to Moshi Moshi Records, a label known for carefully picking only the most creative music makers, Slow Club have released five studio albums and have become known for their compelling videos to accompany their singles as well as their unique sound.

Their latest album release One Day All Of This Won’t Matter Anymore came out in August of 2016 and features the lush country single In Waves which was promoted by an inventive video which used a first person perspective to give us a glimpse of Rebecca’s everyday adventures.

They join the line-up for the exciting Sheffield festival Outlines 2017 taking place on Friday 3rd and Saturday 4th of March, 2017. The festival takes advantage of their home cities premier gig venues, hosting stages at the likes of Queens Social Club, Bloc Projects, The Leadmill, The Harley and Plug.

We were lucky enough to have Charles answer some of our questions about the local scene and more.

The city of Sheffield can boast and expansive musical landscape that includes some truly great acts in the fields of folk, indie, electronica and hardcore. Where do you draw your inspiration from and how does Slow Club fit into the cities rich creative tapestry?

I don't particularly think Sheffield has much to do with what we do. I think there's always been a big element of escapism in our writing so I think our heads were always somewhere else.

The South Yorkshire city certainly enjoys a huge variety of great independent venues, shops and cafes. Where do Slow Club like to hang out when not gigging or recording?

Are there any other up and coming grassroots Sheffield stars that you can recommend?

Despite being a two piece band your recorded sound is surprising full in having guitar and drums joined by synths and string arrangements. How do you recreate this lush feel live on stage? Do you employ on the road session musicians?

Yes we do. We have been playing as a five piece on this album. Drums, bass, keys all cooking up something good back there.

How do you set about writing the songs? Is there one person that takes the lead on any given song or do you work as a pair for the entire process?

It's pretty changeable process. Really depends on the songs. Sometime Rebecca takes the lead, sometimes I do. The writing is reflective of that but sometime one of us will write the music and the other person do the words.

The 2011 album Paradise included the single Beginners which featured Daniel Radcliffe giving a pained acting performance in the video. How did you get him involved and do you still have any contact?

He's a fan of the band and we just blagged our way past his people and asked him. He's a lovely guy! We see him occasionally but he's a very busy chap.

Recent record I Swam Out To Greet You was a covers album which saw you re-interpret the likes of Bob Dylan, Neil Young and hometown heroes Pulp. How did you pick the artists and chose which songs to explore?

It was just a case of 'what are our favourite songs at this exact moment?'

There has been a massive positive reception by the music press towards the release of your new album One Day All Of This Won’t Matter Anymore. As you are looking poised to break over into the mainstream, what can we expect for Slow Club in 2017?

Haha who told you that?? I'd like to have a word with them for spreading these misleading myths.