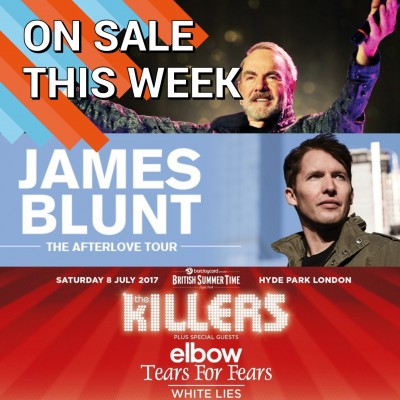 Taking the showbiz and glamour of their hometown of Las Vegas and fusing it with their indie influences, The Killers have become the sound of a generation. They have electrified all with such anthems as Human, Mr. Brightside, Somebody Told Me and When You Were Young.

Their relentless string of hit singles has seen the band become highly decorated having been nominated for a Grammy seven times, won the 2006 BRIT Award for Best International Band and taken home the NME Brat Award trophy in the same category four times. In 2013 they were voted by Gigwise readers as the greatest live act of the year by readers.

Now, The Killers have just been announced to be the latest headliner for the incredible Barclaycard British Summer Time events. Taking place at Hyde Park in London on Saturday 8th of July 2017, the huge outdoor event promises to be the very best way to enjoy a scorching hot day as it fades into the blissful summer evening.

Coinciding with his birthday, musical icon Neil Diamond has just made the announcement that his 50th Anniversary Tour has been extended to the UK allowing you to see the star sing when he performs at an arena near you in October.

A wonderful celebration of a career which has seen his supreme talent make an indelible mark on both American culture and pop music around the world. Having sold over 130 million albums across the globe his place in history is secured so come join in the party with a living legend.

With demand sky high you will need to be quick off the mark when making your booking. So, set a personal reminder with Gigantic right now making you ready for the tickets release at 10:00 this Friday (27/01/2017).

Much loved singer and songwriter James Blunt makes his return with new album The Afterlove. Having recently become equally known for his cheeky chappy social media presence, Blunt told the world the news of the new album with a video taken of him in the bath tub. The Afterlove will be released on Friday 24th of March.

Blunt became a household name with the massive song Your Beautiful and went on to become of the biggest selling recent artists with albums Back To Bedlam, All The Lost Souls, Some Kind Of Trouble and Moon Landings.

To promote his new material and play the very best hits from his fantastic back catalogue, James Blunt has just announced an arena tour taking place in November. Tickets become available at 10:00 on Friday (27/01/2017).

R&B superstar Craig David is enjoying a well-deserved comeback, which is the latest development in a career which has seen the star sell over 15 million albums worldwide, released 16 top ten hits and achieved multi-platinum status in over 20 countries.

Released in Autumn of 2016, Following My Intuition is the latest album release which follows a fine back catalogue of titles including his massive debut Born To Do It, fantastic follow up Slicker Than Your Average, The Story Goes…, Trust Me and Signed Sealed Delivered.

So, ensure you book your tickets early for his upcoming shows in some of the most idyllic settings. David will perform at Westonbirt Arboretum in Gloucestershire and Dalby Forest during June and Lingfield Park Resort in September.

After already announcing a huge headline date at Scarborough Open Air Theatre, best of British ska band Madness will now also be playing at The Falkirk Stadium in August. The fun loving 2 Tone heroes are a perfect way to enjoy the hot summer days. Tickets for the new date become available on Friday (27/01/2017) so set your reminder right now!

Fans of music are excited with the news that Philip Glass and Laurie Anderson are uniting to present a wonder evening of experimental sound in a collaborative effort expected to thrill all in attendance. The pair are recognised as among the most prominent composers of the 20th century and their tickets go on sale tomorrow (26/01/2017).

This week sees the release of a huge range of exciting events. Also about to come on sale are:

Herfordshire festival Standon Calling has just come on sale for 2017. Although they have yet to announce their line-up, previous acts to appear on their stage including Suede plus Florence and the Machine, Friendly Fires, Mumford and Sons so you can expect someone big!

We also have tickets for the Jack Up The 80’s extravaganza and the fantastic Ireby Festival.

Synthpop band Future Islands have all the makings of a modern great. Signed to ultra cool indie label 4AD, they already have a well-earned reputation of creating unexpected songs which are truly satisfying. They have just announced upcoming headline dates for the new year to take place this Spring.

X Japan will be making a rare return to the UK to take over The SSE Arena at Wembley on Saturday 4th of March, 2017. The five-piece Japanese power metal band draw on symphonic elements to create epic ballads befitting of the huge stage.

And finally, Gigantic always has a huge amount of essential gig tickets on offer. Other outstanding events we know you will love are: