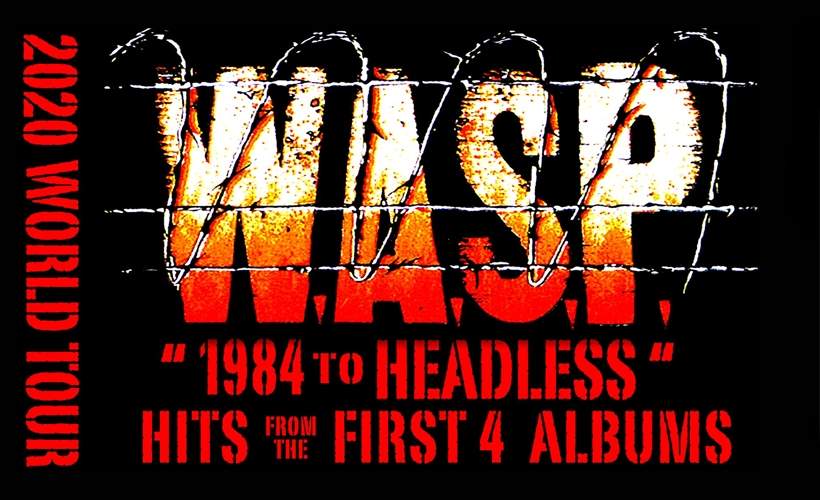 To say Blackie is now in his 60's he has certainly not lost his vocal ability on stage, another fantastic concert. Only down side to the venue is a high price for a cheap pint.

I purchased tickets for this event as a valentine gift for my husband, he loved it.

Great gig small venue so no trouble seeing band performance .last band on my list to see won't forget this for a while.

I have seen W.A.S.P. four times at Rock City in Nottingham and last night was as good as it always is! A great venue and an even better band, long live Blackie Lawless and W.A.S.P.

The ultimate heavy metal band W.A.S.P. have been terrorizing the world since their inception in 1982. Spawned from the same LA scene that created the likes of Van Halen, Mötley Crüe plus Guns N’ Roses, the West Coast hard metallers are known for their unique brand of shock rock which has seen them sell over 12 million albums worldwide.

WASP tickets are now made available through Gigantic. Be sure to book yours before they are gone!

Born following the implosion of glam rock band Circus Circus, W.A.S.P. immediately became notorious for their chaotic and wild live shows. They were signed to Capitol Records in 1984 and soon released their eponymously titled debut album.

Their studio album back catalogue includes:

Given the rarity of a UK performance, the high demand and the limited supplies, we really urge you to book your WASP concert tickets as early as possible or you may miss out on seeing them play! Gigantic offers a fantastic service when booking your essential gig tickets, so make us your first choice and enjoy an unforgettable experience.

Almost six years have passed since the world saw a new studio album from Metal Icons W.A.S.P. That is about to change as W.A.S.P. has signed a new worldwide record deal with Austria’s Napalm Records. W.A.S.P. will release their 15th studio album titled Golgotha this August.
"W.A.S.P. are excited to announce they have signed an exclusive recording contract with Napalm Records. We chose Napalm for their personal belief and professional commitment to our career. We're looking forward to years of great success together starting with the release of our upcoming album Golgotha", states W.A.S.P.front man Blackie Lawless.
Vice President of Napalm Records Thomas Caser on W.A.S.P. joining Napalm Records:
“It is a true honor to announce this signing today, a dream has come true. With their impressive career and ability to create musical masterpieces W.A.S.P have always been one of the most influential Metal bands out there since the beginning of their career. We are thrilled about the upcoming album Golgotha which will be released this summer!”
W.A.S.P. came out of the Los Angeles Metal scene in 1982 gaining notoriety for their shock rock antics. With a career spanning over 3 decades, 17 world tours, and now their 15th studio album, they are a metal band that has evolved in maturity without having lost their signature sound, unlike many of their peers from their origins. Golgotha will continue down the path that 2007's Dominator and 2009's Babylon started on, both in production style and theme. Six years in the making, Golgotha will undoubtedly lead the listeners on the emotionally epic undertaking that W.A.S.P. has become acclaimed for!