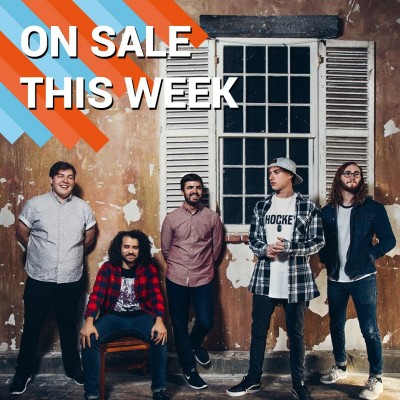 Legions of loyal fans, killer tunes, Gold selling albums topping the charts all over the world, award winning post hardcore band You Me At Six have got it all. Their tracks The Swarm, Fresh Start Fever and No One Does It Better have defined the sound of rock for this generation.

Now the band are back with an autumn tour preceding their upcoming highly anticipated album Night People. The title track has only just been released on YouTube this week with the full record coming out in January next year. Be amongst the first to hear their new tracks when they take to a stage near you!

Click HERE for your You Me At Six tickets.

Not only are massive metalcore legends Bullet For My Valentine set to tour later this year, they have just announced a number of exciting dates where they will play their stunning debut album The Poison in full. Their first record announced their arrival to the world by smashing into the Top 40 in the UK album charts and rose to #2 on the Heatseekers Chart in the States, selling over 1,000,000 copies across the globe.

Since the release of The Poison, Bullet For My Valentine have released a further four studio albums, enjoyed huge international tours and won Best British Band at the Kerrang! Awards three times!

You are invited to a magical winter wonderland beyond your imagination when Disney On Ice Presents Frozen. See all your favourite characters in their home of Arendelle and singalong to Let It Go and other much loved songs.

Joining the royal sisters Anna and Elsa will be many more of your Disney friends including, of course, Mickey and Minnie. A fun day out that will last in your memory forever.

Click HERE for your Disney On Ice Presents Frozen tickets.

We have a fine selection of amazing American rock bands to be released this week. Influential emo band American Football continue their comeback with the release of an eponymously titled album and an exhilarating gig at O2 Shepherds Bush Empire. Keeping the athletic theme, pop punks State Champs will be touring the country in March of 2017 and Pinegrove have announced a new date in February on next year following their UK tour in September. And The Growlers make their return to wash audiences over with waves of surf rock. Also about to be released are tickets for American neighbours Arkells. The award winning Canadian alt rockers have dominated the charts in their home country over the course of their career and hit #3 in their album charts with new release Morning Repot this month. Check out their UK tour this November.

Not to be outdone, we have tickets for superb homegrown talent such as Martin Stephenson who will take his folk rock to Cambridge Junction 2 and legendary London venue 100 Club. Those in the know will be excited by the announcement of East London’s finest industrial spiritual band Pumarosa will be hitting the road in October.

Taking place at both Newstead Abbey at Ravenshead and Calke Abbey in Derby on two separate weekends, Great Food & Drink Festival is a wonderful way of discovering something new to spice up your kitchen.

Not only will there be demonstrations from the likes of celebrity chefs Simon Rimmer and Michael Caines, guests will also be able to try the gastric delights from the many exciting exhibitors and pick up tips at the Master Classes being held.

Based on the characters from the blockbuster movies and world famous Marvel comics, Marvel Universe LIVE! unites over 25 of your best loved superheroes and villains into one action packed adventure suitable for all the family.

The god of mischief Loki has been prevented in using the Cosmic Cube to enslave the entire universe when our hero Thor used his mighty hammer to smash the powerful object into many scattered fractals. Both good and evil must team up in a struggle that will determine the fate of all.

There are few bigger names in Hip Hop than Ghostface Killah. Rising to prominence in the early Nineties with Wu-Tang Clan, Ghostface Killah has also enjoyed a highly successive solo career which began with the release of his debut album Ironman in 1996. He is currently working on material for new album Supreme Clientele Presents... Blue & Cream: The Wally Era which may feature at his show at Waterfront in Norwich.

Out of this world French electronica band M83 will be taking over O2 Academy Brixton. The gig promotes new record Junk, his first release studio album in over four years. Led by Anthony Gonzalez, the Grammy Award winning group are behind such outstanding tracks as Reunion and Midnight City.

It is a good time for rock gigs as supergroup Dead Men Walking are gearing up for their November tour. Comprising members from such huge bands as The Damned, The Alarm and The Living End, Dead Men Walking put on one hell of a show! Fans are eagerly awaiting seeing MassMatiks play live. The South East London lads have blasted on to the scene with their recently released debut single Gunning For You. We’ve also got some great international rock groups on sale including Latvian four-piece Carnival Youth and LA band LANY play a headline show after having supported Ellie Goulding on tour. Plus, Canadian indie band Wintersleep hit the UK to promote new album The Great Detachment.

And finally, Australian producer, singer and songwriter Jordan Rakei is a one-man wonder. Drawing inspiration from dub, to hip hop and beyond, his newly released debut album Cloak has been getting critics very excited. See him tour this November to find out why.