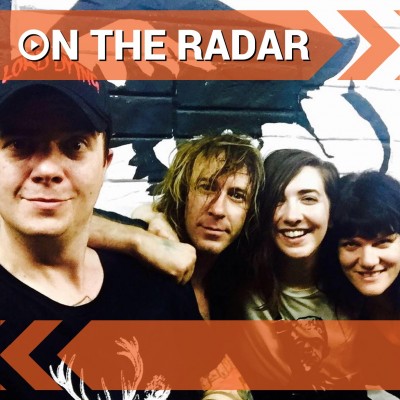 You need to know Summer Cannibals. The fuzzy rock quartet come from American indie rock heartland Portland, Oregon and consist of lead singer Jessica Boudreaux sharing vocals and guitar with Marc Stewart, Casey Frantum on drums and Kyle Brittain playing bass. Taking their name from a Patti Smith song, the band are equally fearless as the woman who penned their namesake. Their songs hurtle into massively walls of sound created by heavily distorted guitars goaded on by pounding drums as heard on previous albums No Makeup and Show Us Your Mind.

Full Of It is the title single from their most recent album. From the bass intro to the big finish, the song is a devil may care joy ride of excitement. The album was recorded in the well-equipped analogue studio The Dock with Chris Woodhouse (Thee Oh Sees, Ty Segall, Wild Flag) famed for his skill for producing garage rock to ensure they captured the jagged overdriven punches perfectly. Stand out tracks include explosive Go Home, gloriously haphazard Simple Life and the absolutely unforgettable song Say My Name. The latter of which has that absolutely vital timeless element of feeling like a song you have always known, even if it is the first time you have ever heard it.

The record is released by Olympia, Washington, based indie label Kill Rock Stars. Known for championing similar sounding bands since it began in 1991, it is a wonder that KRS did not pick up Summer Cannibals before as they certainly sound like their exact sort of band.

“Summer Cannibals take us back to our roots. Jessica is a great songwriter and the band is super exciting live, it’s a perfect fit.” – Portia Sabin, KRS President

Make sure you don’t miss their performance at The Prince Albert in Brighton on Thursday 6th of October.

Taken from their recent EP Safe, Brighton indie band High Tyde have just released their new song Wine. The song swaggers with effortless confidence backed by some killer lead guitaring and some great use of synth. It follows the more frantic math rock song Dark Love taken from the same EP which just begs to kick off the disco dancefloor.

The band shot to attention at the beginning of 2012 with the release of their debut EP Meal Deal and comprises of drummer Louis Semlekan-Faith, guitarists Connor Cheetham and Spencer Tobias-Williams with vocals from bassist Cody Thomas-Matthews. They’ve continued a steady output of fantastic extended plays that you really should check out including Teal, Fuzz and Glow.

The inspiration for their name comes from being based by the sea and the boys have been causing joyful mayhem from coast to coast having become vital additions to the festival circuit. Their upbeat dance enthused guitar anthems have also caught the attention of the likes of Annie Mac who has premiered their tracks on her show.

Now the dark days are coming you can continue the summer vibes when High Tyde take their tracks indoors when they play their headline tour this Autumn.