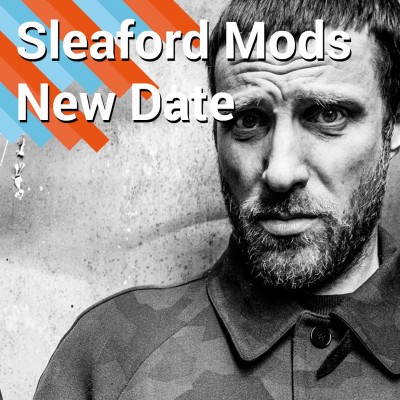 Loud mouth electro-rant pair Sleaford Mods have announced a second night at Rock City in their adoptive home of Nottingham due to sheer popular demand. Tickets for the new date of Friday 4th of November will soon be available after their performance the night before sold out at lightning speed.

Somewhat post punk. Kind of freeform spoken word. A lot of shouting. Jason Williams spits his verbal tirade into the mic assaulting whatever aspect of urban life has wound him up last whilst Andrew Fearn dutifully stands mute by the laptop to load up the pre-recorded beats on the laptop and press play, never without a beer in hand

Sleaford Mods built a cult following through a series of albums that detail the frustrations of working class life in amidst austerity Britain. Track such as Tied Up In Nottz, Tiswas, Fizzy and Mcflurry chimed with a generation that is being force fed debt, zero hour contracts and accept relentless cutbacks leaving entire communities embittered and alienated. Their rise was spotted by the music press and their breakthrough album Key Markets which broke the Top 20 and was listed by both NME and The Guardian in their 2015 lists for Album Of The Year.

After taking some time out following gruelling touring and spending some time in Bristol to record their next studio album, Sleaford Mods return for an Autumn tour.

“After a bit of a rest (sort of) the Sleaford mean machine once again rattles around the UK, if you fancy it. No gimmicks." – Jason Williamson

The complete tour dates are now: