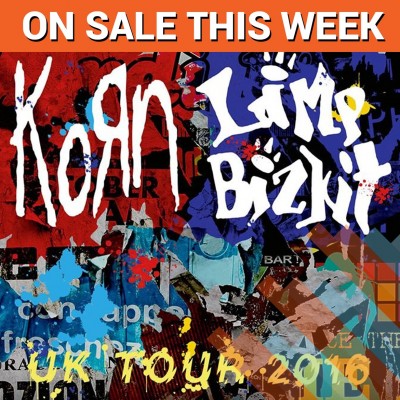 Flamboyant, decadent and with undeniable incredible talent; Elton John is the absolute definition of a superstar. The multi award winning pianist possess the rare ability to rouse and unite an entire arena whilst making each and every single person in attendance feel like he is playing just to them.

Having sold over 300 million records from a back catalogue that includes 128 singles and 33 studio albums it is no understatement that Elton John is amongst one of the greatest ever performers of all time whose hits include Rocket Man, I’m Still Standing, Something About The Way You Look Tonight and Candle In The Wind. Do not miss your chance to see the living legend play for yourself.

Nu metal legends Korn and Limp Bizkit have teamed up for the ultimate tour this winter. The co-headline tour is set to promote new Korn album The Serenity Of Suffering which features a guest vocal appearance from Slipknot singer Corey Taylor and is produced by Grammy Award winning producer Nick Raskulinecz (Foo Fighters, Deftones, Mastodon).

"We’re really proud of our new album and we can't wait to play these songs for our amazing fans in the U.K.; they are some of the best in the world! This tour is gonna be sick!" - Korn

With the impending release of new album Stampede Of The Disco Elephants, fans of Limp Bizkit will be excited at the possibility of hearing songs from a new album after having to wait over five years since the last.

Original Mercury Music Prize winners Primal Scream have always enjoyed a reputation for excitement, invention and for being the coolest rock and roll band around. Having first been a key player in the emergence of indie in the late eighties they were to truly discover their dance rock sound in 1991 with the release of Screamadelica which won said illustrious award. The album has subsequently been followed by forays into country pop, blues rock and full on electronica dance.

Earlier this year saw them release amazing new album Chaosmosis which is yet another peak in the band’s ever constant high output. The record features the singles I Can Change and Where The Light Gets In which duets Sky Ferreira with singer Bobby Gillespie.

When a band receives such acknowledgement from such luminaries as Kurt Cobain who gleefully described Teenage Fanclub as “the best band in the world” and Liam Gallagher who bestowed them the honour of “second best band in the world” just after Oasis, then you better sit up and listen. Glasgow band Teenage Fanclub merged the joyous sound of sixties West Coast America with sardonic lyrics of sex, death and heavy drinking to create music that is both immediately inviting but also disarmingly dangerous.

The indispensable band have returned with their brand new album entitled Here which has delighted critics and left fans ecstatic. To mark the release they will be touring in November.

Grime star Giggs will continue his summer success with a immense London show at the O2 Forum in November. Having steadily grown in stature since the release of his debut album Walk In Da Park in 2008, Giggs (AKA Nathaniel Thompson) has seen each subsequent release rise in chart success with his latest offering Landlord hitting #2 this August.

Tickets for Supertramp singer Roger Hodgson are just about to come on sale. Having shot to the fore in the seventies with the exhilarating progressive rock group Hodgson forged a wildly successful solo career which began in 1984. Get your tickets to see him perform in May of next year.

We are about to release tickets for some of the very best hard rock bands in the world including classic goth group The Sisters Of Mercy, Black Star Riders who are set to launch new album Heavy Fire next year and excellent emo rockers Taking Back Sunday.

Keeping it alternative, Gengahr are gearing up for an exciting Nottingham show plus Minnesota indie rock band Low have announced three special Christmas Performances that must not be missed. Taking place on Saturday 27th of May, 2017 at Manchester Academy, Gigantic Indie All Dayer is an mind-blowing festival which includes some of the biggest names to grace the indie disco dancefloor. Confirmed so far are unbelievable band EMF, sample superstars Pop Will Eat Itself and trouble maker Jim Bob from Carter The Unstoppable Sex Machine plus The Primatives, Thousand Yard Stare and Mark Morris of The Bluetones.

What a way to enjoy the bank holiday!

Click HERE for your Gigantic Indie All Dayer tickets.

Hosted on the grounds of the Crystal Palace Park, 2016 marks 150 years of the absolutely unmissable Crystal Palace Fireworks show. The show starts at 19:00 with an exhibition aimed at a younger audience with bright colours but not as noisy but then the show will truly explode at 20:30 with plenty of bangs for your bucks.

So remember, remember to be at Crystal Palace for the fifth of November to enjoy a fun evening for all the family.

Plucky Plymouth guitar player Jamie Lawson was the first act to be singed to Ed Sheeran’s label Gingerbread Man Records after rising to prominence through performing at the best pubs and bars around the UK and Ireland. His spectacular single Someone For Everyone features on his recent album and launched him on the festival track. Now, through popular demand, he is ready to play a huge headline tour this October.

Calling all Numanoids! The Tubeway Army general himself; Gary Numan is back on tour. The darkly enigmatic synthpop icon will be hitting a stage near you this September. Expect to hear everything from his extensive back catalogue the stretches from his recent masterpieces back to such essential seventies electronica tracks as Cars and Are “Friends” Electric?

Southampton’s finest garage rock band Band Of Skulls have released their forth studio album By Default and are ready to promote the new material with shows in October. Keeping you rocking, we are really excited to hear drummer Dave Neale of Rooster and Death in Vegas will now be joining industrial metal band Vex Red. Plus, The Quireboys will be tearing it up on tour, The Burning Hell are now on sale and Laura Kidd’s pop/rock project She Makes War is about to hit the road.

Returning from a brief hiatus after completing tours with such massive names as Lana Del Ray, KT Tunstall and Birdy, singer/songwriter Billy Lockett will play a greatly anticipated set at St Pancras Old Church. We also have tickets for special sets from the absolutely compelling Sarah Walk, talented veteran Paul Young and Cat Le Bon who is rising from independent pop spectacle to become an international sensation.

And finally, the ultimate cheesy pop and rock night out Club De Fromage are taking their tunes on to the rink. Skate away to best classic disco songs from the swinging sixties right up to the naughty noughties at the Alexandra Palace Ice Rink.