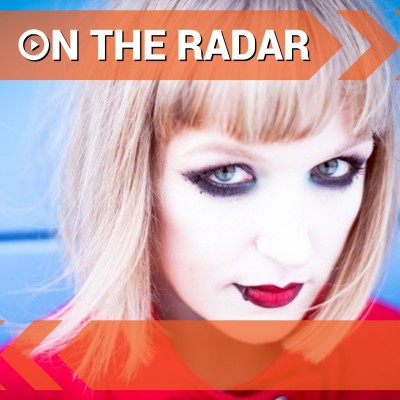 Go grab your glitter and your 99p eyeliner because glam indie pop has a new hope in the form of She Makes War. Not a band but the work of Laura Kidd who varies from playing independently to full band accompaniment, depending on the song.

Influenced by riot grrl, new wave of the wave and nineties LoFi synthpop, Kidd offers a range in her sound that extends from fragile bedroom confessions to bright polished radio friendly songs through to full on rock.

Her latest album is entitled Direction Of Travel which features recent single Cold Shoulder. The brooding song is a refusal to pursue an unrequited love interest any longer. The cool ambivalence in Kidd’s voice emphases a distain that the usual shouting and screaming other bands of similar ilk just can’t match. Understated vocals also work perfectly when Kidd questions the impending fallout with the darkly humorous line;  “What’s coming for me; ex-girlfriend or STD?” With its imitation of motown drums during the chorus and the using brief rhyming couplets for the verses the rhythm gets into your head and quickly moves to your feet.

Other excellent tracks on Direction Of Travel include ethereal pleading petition Please Don’t, the stripped down heartbroken song Paper Thin which features Throwing Muses Tanya Donelly and Drown Me Out which remains holds huge commercial potential despite the dark subject matter.

We are certainly excited for her November tour which takes her to Birmingham, London and Bristol.

Since the release of their single Sun Dance, new band Clay have certainly been getting some attention. Song writing brothers Jack and Joe Harvey united with Danny Armitage plus Rob Gration are beginning to amass quite a loyal fan base which were visibly present when they played the Sheffield festival Tramlines in their home county of Yorkshire.

Touring in December, they will be hitting up the cool clubs of Leicester, Oxford, Bristol and London.

From their camcorder videos to the wonky synth that rides over hazy vocals and baggy guitars they pay homage to the spaced out second summer of love and a nostalgia for the rave days of the nineties despite being far too young to enjoy either. In fact, it is dubious they were even born when needles first hit the groove of The Stone Roses debut – maybe not even Screamadelica!  But that isn’t the point. The four Leeds lads encapsulate the Northern swagger engineered at the time and update it with the latest tech and some millennial energy.

Get your Clay tickets before they’re gone!