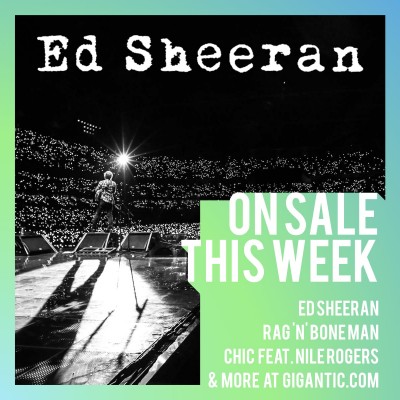 Ed Sheeran certainly proved why he is one of Britain’s biggest selling artists when he single-handedly headlined The Pyramid Stage at Glastonbury bringing the iconic festival to a gigantic climax as watched by an endless audience present plus a further3 million viewers at home.

Now you can see the looping wonder play live for yourself as he unveils a massive tour taking him to some of the biggest stadium stages the UK has to offer next year. Ed Sheeran tickets will fly off the shelves so set a personal reminder right now so you can be alerted with a text message or email when they become available.

Ed Sheeran tickets are released at 10:00 on Saturday 8th of July.

Rag 'N' Bone Man AKA Rory Charles Graham combines blues and soul with pop to create a fresh new sound. Earlier in the year saw the release of his remarkable record ‘Human’ which went in straight at NO. 1 in the charts selling 117,000 copies in the first week alone making him one of the fastest selling male artists of recent years.

Now he takes his show on the road for ‘The Overproof Tour’ which takes him to O2 Academy Brixton in London and Wolverhampton’s Civic Hall in November.

CHIC feat. Nile Rodgers are the undisputed masters of disco and funk. First formed in 1976, they pioneered the sound that would dominate the dancefloor with such smash hits as ‘Le Freak’, ‘Good Times’, ‘Everybody Dance’ and ‘I Want Your Love’.

Coming off the back of their amazing performance on the Pyramid Stage at Glastonbury, they have just announced a spectacular show as part of Bluesfest taking place at The O2 Arena on Friday 27th of October. CHIC tickets will go fast so act fast and book yours now!

Shrewsbury Folk Festival gathers together some of the world’s best performers and encompasses everything from traditional to the cutting-edge acts and the exotic. The big celebration takes place over five dedicated venues each offering something wonderful.

The festival runs from Friday 25th until Monday 28th of August and also includes a craft fair, a dance tent and events planned especially for youths and children which promises to offer something for all the family.

Later in the year sees the release of Nothing But Thieves highly anticipated follow up album ‘Broken Machine’. The rockers have announced a November tour to promote the new material which takes them to stage near you. Nothing But Thieves tickets will come on sale at 09:00 on Friday 7th of July.

Incredible indie band Fleet Foxes have just released their third album ‘Crack-Up’ which is being heralded by many critics as their best record yet! Catch them when they take over O2 Guildhall Southampton in November. Fleet Foxes tickets will come on sale at 10:00 on Friday 7th of July.

Gigantic always has the very best gig tickets coming on sale every day. Set yourself ahead of the rest and set a personal reminder with any of the exciting shows about to come on sale so you can be alerted with a text message or an email as soon as they become available.

Further events we know you will want to check out are:

Fans of comedy are excited for Stand Up In The Wyldes. Offering such major names as Bill Bailey, Katherine Ryan and Russell Kane plus many more rising stars, it’s a whole load of funny!

Get to Higher Fields in Devon on Friday 21st and Saturday 22nd of July to enjoy The Shires, Soul II Soul, Slamboree and Skinny Lister at Chagstock.

Celebrating the weird and wonderful, Indietracks is the ultimate alternative festival and is held at Midland Railway Centre from Friday 28th until Sunday 30th of July.

Virgin V Festival is the perfect pop festival bringing you such big names as Pink and Jay Z to both Weston Park in Satffordshire and Hylands Park in Chelmsford.

Best Of The Rest

Metal monoliths Stone Sour are one of the biggest heavy rock bands in the world, selling an incredible 2.1 million records and packing out every awesome performance. With the release of their fifth album ‘Hydrograd’ comes a huge accompanying arena tour to finalise the year.

Cheeky chappy Olly Murs is currently out on the road for his Summer Tour 2017 promoting his NO. 1 album ‘24 hrs’. We spoke to Olly about these highly exciting upcoming shows and you can read all about it HERE.

And finally, Gigantic proudly provides you with a vast range of essential gig tickets with more coming on sale all the time. Keep checking our site to see what new things have just landed on our site. Other events we know you will love are: