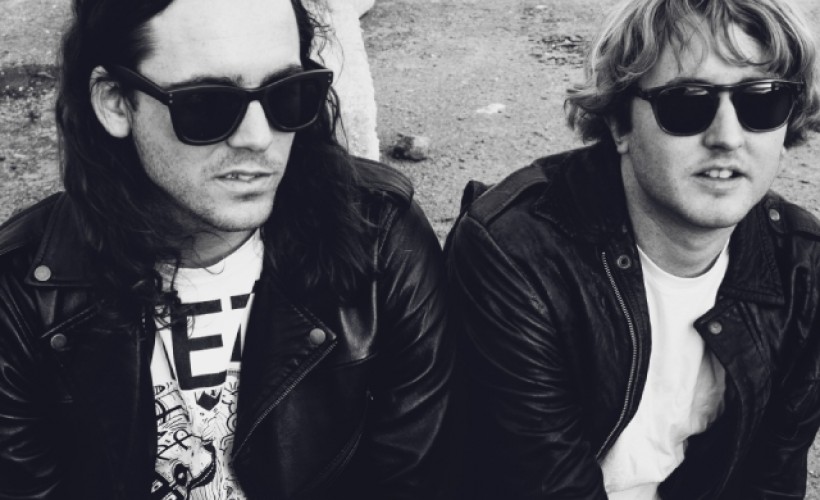 Dance punks DZ Deathrays are known for their fast-paced exciting tracks making for wild live performances. The Australian band have only recently emerged and quickly become a formidable force with fans around the world.

Make sure you see them absolutely destroy the audience at Underworld in London on Tuesday 8th of October 2019.

Now is your chance to book your DZ Deathrays tickets with Gigantic, we are very excited and as demand grows it makes sense to act fast and get yours before they are all taken. Gigantic makes selecting your favourite tickets and placing your order easy by enabling access to our site 24/7 using your smartphone, tablet or computer whilst relaxing at home or even busy and on the go.
We know that it is easy to forget when your favourite act goes on sale. So, place a personal reminder with Gigantic and then we can alert you with a text message or an email just prior to their release at 09:00 on Friday 3rd of May.

The Queensland pair had originally been founding members of the band Velociraptor with whom they still play. They recorded their debut EP Ruined My Life live at a house party which was released in 2009.

This was followed by their debut album Bloodstreams which again was recorded at a furious pace, in only two weeks, and came out 2012. The album thrilled critics and prompted NME to declare “This album has the potential to make your little sister want to shave her head and invest in mock leather hotpants. It’s the penned seduction of a weekend of irresponsibility and a Monday full of inferior excuses.”

Bloodstreams was a massive catalyst for the band and propelled them towards larger audiences and saw them win the Best Hard Rock/Heavy Metal award at the 2012 ARIA Awards.

They continued to develop and returned with a more mature sound for their second album which was entitled Black Rat upon release in 2014. Recorded over the course of six weeks of gruelling sixteen-hour days at The Grove studio in Australia with producer Burke Reid (MSTRKRFT, The Drones, The Mess Hall), Black Rat showed remarkable development for the band whilst remaining true to their signature self, from their debut Bloodstreams.

Last year saw the release of their latest LP Bloody Lovely which has been their biggest commercial success so far, reaching #4 in the Australian charts. It was also a huge hit with the critics too.

“The Deathrays deliver the sonic equivalent of a fighter jet buzzing a control tower, and while they may not bring anything too new to the White Stripes/Black Keys power duo model, they've certainly proven that they belong in the same arena.” - AllMusic

Everyone is excited, and we at Gigantic expect our limited supplies DZ Deathrays concert tickets to sell very quickly - so make sure you book yours before they all go!
Gigantic is famed for its excellent customer service which led to the Nottingham Post bestowing their illustrious ‘Retail Business of the Year’ award last year. So, choose from our wide range of essential gig tickets and know we are the best place to come whenever you are planning your big night out!

Brisbane’s finest duo DZ Deathrays are proud to announce their signing to esteemed label, Infectious Music, along with details of their second album - Black Rat - and a free download of track, ‘Gina Works at Hearts’.
Known for their ability to nurture, break and release some of the finest alternative artists, including alt-J, These New Puritans, Local Natives and the recently lauded Drenge; Infectious will release DZ Deathrays’ Black Rat in the UK/EU on the 18th August 2014.
After signing with I Oh You in Australia and touring for the past two years with acts like Foo Fighters, Ratatat, Sleigh Bells and at festivals such as Reading & Leeds and The Great Escape, Black Rat was recorded over the course of 6 weeks, which took in 16hr days, at The Grove studio in Australia with producer Burke Reid (MSTRKRFT, The Drones, The Mess Hall) and shows a truly amazing progression, whilst remaining true to their signature self, from their debut Bloodstreams.

Get your tickets for DZ Deathrays through Gigantic now!