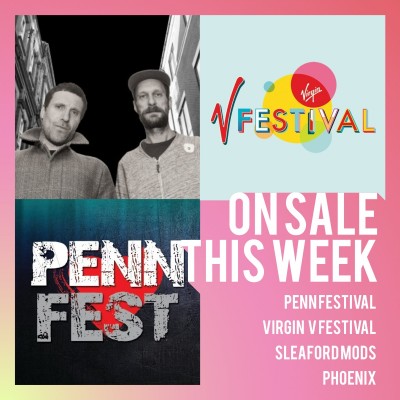 Indie icons James have just been added to the Penn Festival line up which is already bursting at the seams with such amazing acts as Primal Scream, The Charlatans, Sigma and The Coral plus much more. The weekend promises to be a mighty mix of classic bands and cutting edge artists which will doubtless be one of the biggest weekends of the year.

So, join Penn Festival at The Big Park in Buckinghamshire from Friday 21st until Saturday 22nd of July for an unforgettable summer festival experience.

Virgin V Festival has continued to be one of the most exciting British festivals since its inception in 1996. Each year a heady mix of rock, pop and more offering you the very best in contemporary music. The organisers have revealed that the 2017 headliners will be feisty singer Pink and rap legend Jay Z.

The festival runs simultaneously at Hylands Park in Chelmsford and Weston Park in Staffordshire where you will see each headliner at both sites. Tickets go on sale later in the week so set your personal reminder right now.

Offering a secluded escape from the modern world, Latitude Festival is a perfect experience for all the family. Enjoy the many activities, the Enchanted Garden and the many stages offering such thrilling acts as The 1975, Fleet Foxes, Mumford And Sons plus more.

Latitude Festival takes place at the idyllic Henham Park in Southwold from Friday 14th until Sunday 16th of July, 2017. Be there!

Tapping into the frustrations of  declining post-industrial Britain, Sleaford Mods document the experience of a public subject to the whims of sadistic bosses, zero hour contracts and years of governmental mismanagement through their music. Jason Williamson barks into a mic once Andrew Fearn lines the next track up on the laptop.

With the impending release of new album English Tapas, the terrible twosome have announced an autumn tour. Tickets are expected to sell quickly upon release so book yours early!

The EFG London Jazz Festival is an annual ten-day celebration of the world’s leading musicians in the genres many forms. This year, the festival celebrates its twenty fifth year with a stunning array of artists including Pat Metheny, Average White Band with LaSharVu, Phronesis and many more. EFG London Jazz Festival tickets go on sale at 10:00 on Friday (3rd of March).

Tom Jones has just announced an extra date to his summer tour. See the sex bomb blow up at The Spitfire St Lawrence Ground in Canterbury in June where he will play the very best selection of his greatest hits. With his other dates already selling out, we recommend you set a personal reminder right now!

This week sees a huge range of essential events coming on sale with Gigantic. Get ready for the release of all the following:

Wilderness has once again amassed an awesome list of acts for a full on long weekend of action. You can see the likes of Two Door Cinema Club, Grace Jones and Bonobo at Cornbury Park in Chadbury this August.

Hidden away in the beautiful Leicestershire countryside, 110 Above derives its name from Gopsall Hall Farm where it is located which is 110 metres above sea level. This year it plays host to Sundara Karma and more.

Fans of electronic music in all its forms will be flocking to Field Maneuvers for three nights featuring the likes of Ben UFO, The Black Madonna and many more. The secret location has yet to be disclosed so keep your eyes peeled.

With Hull currently enjoying a year of being the UK City Of Culture, the celebrations continue as their finest adopted son Paul Heaton returns home to take over Hull KC Lightstream with long term collaborator Jacqui Abbot for one glorious night only. The pair will perform material from their recent records plus classic songs of The Beautiful South and The Housemartins.

Seminal indie band Senseless Things make their welcome return after splitting almost twenty-two years ago. The band were vital viewing for almost a decade and remain an important part of rock history. Catch them when they play at O2 Shepherds Bush Empire in March.

Other events we know you love include: